My dad and I are in line for a new Suby build w Special Edition. We are trying to pick the right seatbelt configuration.

I am leaning towards the traditional 2-point lap belt. I think they look better than the awkward mounting of the three point shoulder belt option. But I know that is the safer option.

Does anyone have a Beck with the three point? If so, I would love to see some pictures of how it looks and get your feedback on the setup.

What does everyone prefer?

Half the fun of our project is getting on here each day to read all of the great info.
Thanks for the fun!

I put a simple 2-inch 2-point lap belt on my Spyder. The big "race" looking ones are cool but not as comfortable for most people. In my car's case, not likely much safer with no side impact protection or roll cage.

I say go skinny 2 or three point unless you're going racing, in which case go for a Simpson or Crow harness as sanctioning organizations require.

Thanks.
Definitely not racing. Just cruising.

I converted my Beck Speedster to lap belt because the originals were mounted so low that they were uncomfortable on a long drive and I was concerned that they could cause injury in an accident.  The lap belts were MUCH more comfortable.  Of course I was injured in an accident later because I only had lap belt, which allowed me to smack the steering wheel with my face.  The only way to prevent it is to add a roll bar and go with 4-point belts like I am in the Coupe.  Otherwise ya pays yer money and ya takes yer chances.

You can pick up a secure spot for the three point seat belt shoulder strap just behind the seat on outside wall. 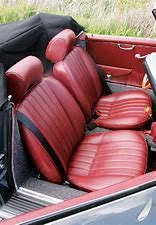 You can pick up a secure spot for the three point seat belt shoulder strap just behind the seat on outside wall.

Secured to what, fiberglass?  Is there any steel in there?

I was thinking that, too, Rick.  Even if there is a steel plate of some sort behind the fiberglass, I’m not sure I would trust it to hold me upright in a head on crash.

Installing a roll bar with the shoulder belt attach point up on the side of the bar is the way to go for a three-point hitch.  It also gives you the flexibility to go to a 4 or 5 point set-up, too, which is great for racing but a PITA for just cruising.

There is on a typical sub-frame like used on early IM/CMC/FF/VS.  A square steel bar that goes up vertically behind the door as seen in photo.  I added a piece of angle iron to raise that point up higher - I then added a flat steel bar to the back of the frame for support from butt sag.  I don't know what the tube  frame looks like on a Beck - as you can see on the CMC the front vertical steel provides a place to hang the door hinges (it's also tied to other side's door post)  and with the one behind door there these provide "some" side protection.

Lap belts keep you in the car. Three point and up keep you from being injured or killed.

It's all about risk assessment, at least for me. The chances of flipping over in an open car are very low. The chances of a side impact are moderate. The chances of the front of your car striking something and you slamming into the dash/steering wheel are very high. Honestly there is no way to predict what will happen or if you'll survive. I say prepare for the most likely event: a direct or glancing blow to the front or getting rear-ended. Shoulder belts combined with a lap belt will probably let you walk away, or maybe with only minor injuries.

I'm lucky to have walked away from a 60 mph smash into a guardrail wearing only a lap belt, in a Spyder. The only thing that saved me from smashing directly into the steering wheel was the spin that happened from hitting the guard rail. I have a permanent loud click in my neck from severe whiplash. It took me several months to recover from the back and neck injuries and return to work.

I now have 5-point Race Quip harnesses in my NEW Spyder. I put all five points on, every time I go for a ride. It is easy, and you get used to it quickly. They also have a twist quick-release. Each belt snaps into its own hole in the buckle/release.

The buckle/release is on the right lap belt. So you get in, snap in the crotch belt, then the left lap. The the two shoulder belts one at a time. It takes maybe 10 seconds.

The side benefit is they keep you planted in the seat, not wasting energy and attention on your position, which lets you focus on being a better driver.

Installing a roll bar with the shoulder belt attach point up on the side of the bar is the way to go for a three-point hitch.  It also gives you the flexibility to go to a 4 or 5 point set-up, too, which is great for racing but a PITA for just cruising.

Look at the Boxster. The factory roll-bar is also the attachment point for the shoulder belt.

I don't agree about the "PITA for just cruising" unless you're talking about the old-school latch-and-link belts. They absolutely ARE a PITA.

Yea, that's what I meant.  Those old belts held you in place, but weren't the most comfortable thing in the world on a long ride.  the best thing about them was that they really worked.

I live in the LA.  (SoCal)  area and named my rollbar/seatbelt assembly the L.A. system after Lane Anderson. After I took one look at his face after his crash I realized that I'm just too pretty to have that done to mine !  Get the full set and enjoy life. This is one lesson you just don't want to learn the hard way. Seat belts don't have to look ugly. They can look "Racey" too !......................Bruce

I do wish there was some 'kit" that was available to provide support for better belts on the Spyder. I have frame running the bottom side of the firewall.

In my head, it seems there would be an easy way to use it to add some type of metal support vertically to that for 3/4 point belts..

You could get a bar fabricated by a chassis builder/machine shop and have it welded in behind your firewall. Have them use 1.5" or 1.75" DOM steel, mandrel bent in a hoop. Weld the hoop in then add diagonal bracing from the top of the hoop rearward and down towards the main 3" frame rail. Or just buy a Vintage LOL!

Sign In To Reply
Post Content
*~*~* Paid Advertisement *~*~*
Gordon Nichols replied:
@Michael McKelvey That happens all too frequently in London. Besides suffering jet lag (always worse traveling west to east) all of the...

AmericanWorkMule (Mark) replied:
Holy Smokes
Gordon Nichols replied:
Wray's a good friend and his shop is about a 20 minute drive from me, out into the country. He ALWAYS has some fabulous projects going...

Michael McKelvey replied:
@Gordon Nichols , you mentioned yanks looking in the wrong direction. My daughter did that and got hit.

Gordon Nichols replied:
I've been to Ireland many times, but to the UK (London and suburbs) only a few and in London I never drove. That said, stepping off of a...

Bob: IM S6 replied:
We've been to Scotland twice, with a few years distance between trips. Trip one, we rented a car. Driving on the left side, shifting...

aircooled replied:
Been watching him for a couple years now on the advice form Gordon or Al. This guys shop, skills and knowledge are OUTSTANDING ! I...

aircooled replied:
I wouldn't replace them unless the throttle shafts are worn out and they are sucking a lot of air in at idle.............Bruce

Jethro replied:
I'm with Stan. In my opinion, he always had a bit a chip on his shoulder and was quick to bite at people. Yeah, it sucks he didn't make...
barncobob replied:
he has WAY more patience than me

South Coast Martin (UK) replied:
Robert, slow driving in Scotland is either due to two reasons: 1. Tourists pootling along looking at the view rather than driving to get...

Lane Anderson replied:
I’ll agree with you there, Stan, even if I find some of there choices, um... inexplicable.

Stan Galat replied:
Regarding Chav , and their NA counterparts-- it's so not my thing, but at least they're rolling something ( as opposed to staring at a...

Robert M replied:
When my wife and I were in Scotland a few years ago for our 30th it seemed as if NO ONE drove faster than the speed limit. I rented a...

Bob: IM S6 replied:
and lowered. Has to be lowered with 18" wheels.