C shape because it actually inserts thru the firewall into the dash area inside......Bruce

Ray thats not a pic of the frunk its the engine lid.......Thanks  though!

I will have to re-drill mine because if used like they are the back of the hinge by the bonnet digs into the firewall very quickly. Have to move them forward an inch.

Brock...Here is how I modified my engine lid hinge to be used as a "hood-holder-upper". Since you have them off, why not ! After seeing your work I know you can do it. It beats the crap out of hinge-pin way............Bruce

Got some seam sealer and did the floor, stuff goes a lot farther than i was expecting. It works! Man what a pain this was and its not done yet. Didnt realize untill after i cut nice straight slots in the firewall for the hinges that they are NOT straight! So that means lots of filling with glass and cabosil to get them right....... Got some nasty holes to fill here! My Fiberfab has a thin square of rubber floor mat type material with a slit in it covering the holes where the hood hinges move through.

Think the build manual calls it black ribbed hall runner.  I've seen some nice installs here with an aluminum trim around it. There is also a rectangular plastic beige box that gets installed and fiberglassed in under the dash around each hinge too. Jimmy sounds like what i had in minds after i true up the holes.

Wolfgang, never seen the box set up before.

The CMC hinge boxes were shipped separate (they were crudely made from some sort of hardened foam into a mold), but they were buried out of sight up under the dash and could be glued in with Bondo after the hinges were installed.  The purpose was to minimize air leaks from the Frunk into the cockpit.

But by now you're probably asking; "Well, what if I want to remove the hood later on?"

The answer is, you have to remove the hood from the brackets because you can't get to the hinge pivot bolts.

I'm sure the CMC box is to keep water and air from infiltrating thru the frunk into the car. I added the cut for the hinge per the build manual.

Here's an example.  Many then add a carpeted trunk liner. 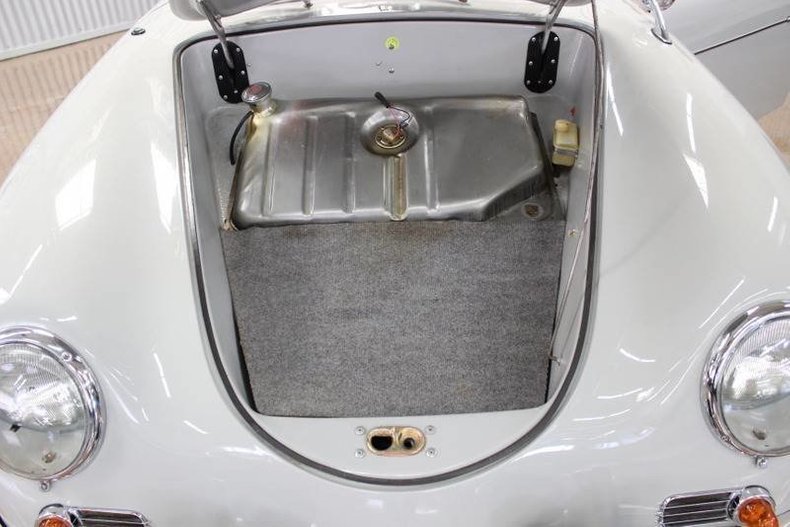 Looking good, Brock. If I could give some (unsolicited) advice- drill some holes in the hinges before they are permanently installed, as they look heavy. Just sayin'...

Gordon, yeah the boxes would make it hard to do.

Btw what is the rubber seal around the lid from?

ALB, may do that also thought of engine turning them. You also need to have a small drain hole at least I have one at the low point unseen when the lid is closed for draining the water.

Btw what is the rubber seal around the lid from?

At speed, water and air get forced into the frunk with no place to go.

Engine turned trim plates would look good Brock. In the pic I posted of my engine turned firewall, you will see some similar plates around the rear deck lid hinges. Closes up the gaps nicely.......Bruce

ALB, may do that also thought of engine turning them.

Do the holes first. If you still have energy for it left, THEN engine turn them. Being aluminum there won't be very much weight loss, but they'll look waayyy cool!

Bruce's drilled and engine turned rear mount; it could use a few more holes, but it's a start I use a combination of Home Depot 3/8" "D" shaped door weather strip from "Frost King" (Hardware aisle but beware - it comes in white only) as well as slightly larger 7/16" hollow, lipped "D" shaped stuff that was recommended by @MusbJim

I can't remember where I bought it from.  Jim will know.  Might have been McMaster-Carr.  I needed two different heights because of differences in spacing between the hood and body at various points around the opening.  If you get "D" rubber too thick  you need an elephant to sit on the hood to close it.  Too thin and it leaks.

The next time I seal mine I think I'll use a seal like this: If you make a much SMALLER hole than the yelllow dot I showed on the pict it will aleviate the water that always sits at that spot... just saying.

A little patching and some new CAD. WOW! This made the hood hinges look like a cake walk! These things are just a bunch of guess work and measurements  because the doors are already together. Still have to finnish this one and then doo the pass side........ I had a body shop do the fine tuning on my doors. My doors were out of adjustment when I bought my Speedster from the guy who build it. I was afraid I would scratch up the paint while trying to get the door alignment and gap set correctly. The body shop guys did a wonderful job.

Jimmy, that was a smart move. Let the expert s do what they know. It was probably easy for them.

I saw Henry and Kevin at IM adjust a door it literally was a 5-10 min job for them.  Impressive, most impressive.

Adjusting doors: Tape both the doors and door jamb edge with blue tape to avoid scratching the surfaces . Open door and while supporting it from the bottom sturdy cardboard box or a floor jack with a towel on the round plate. Loosen the hinge screws on the top and bottom hinges. Go back and lightly snug one top center and the bottom center screw you should be able to grab the door and move it slightly with enough " drag " on the hinges to keep it in place, if to lose snug the two screws a bit more. Check your margins and tighten the remaining hinge screws Lastly check that the door still hatches " two clicks " on the door latch. Driver door with a 1/4 shim in the bottom hinge now looks good on top. But the bottom is now out 1/4 so it looks like i will have to split the bottom and remove that amount and re-glass. Bruce, a whole LOT of cussin and VERY hot work happened making these go on...something that could have been avoided by having a couple simple patterns be included with the body...... Oh, that is too bad.  Stuff happens at times doing any work.

Looks like a job for Loctite PL Fast Grab Premium!

Ray, no thats good now the bottom of the door will line up to the rocker.

Gordon , never tried it but i already have it glued together with cabosil and a couple layers of glass ready to go inside.

Oh I did not understand what was happening.

I use to have a 69VW beetle that would not move out of gear in sub zero weather.
1 hour ago

Are you saying that the engine cuts out at 4800 like an rpm limiter? Does it just miss fire or cuts out?
1 hour ago

I just noticed that I have to hold my shift lever in reverse in this cold weather. Otherwise won't stay in gear. When it warms up, it's...
1 hour ago

I could see coil overs with adjustable shocks (like Koni or Bilstein) - especially if you have oversize wheels/tires.
2 hours ago

I like this owner! I also love the dilemma it puts the painter in: strain like hell to get an exacting stroke-for-stroke replica of the...
3 hours ago

Having survived all that, Stan, you owe yourself some time in the UK. We've been discovering it, a little at a time, over the past few...
3 hours ago

Lots of guys say, "if I'd have known I was going to live this long, I'd have taken better care of myself". In my case-- I never once in...
4 hours ago

Stan, if you should be accident-prone. . . please don't try this!!
5 hours ago

At one point or another he has visited all of us. In Stan's case he must have been living in his work van jinxing him all the while.
10 hours ago

If you always have that little dark cloud over your head...well, you certainly might carry the Btsfblk gene!
10 hours ago