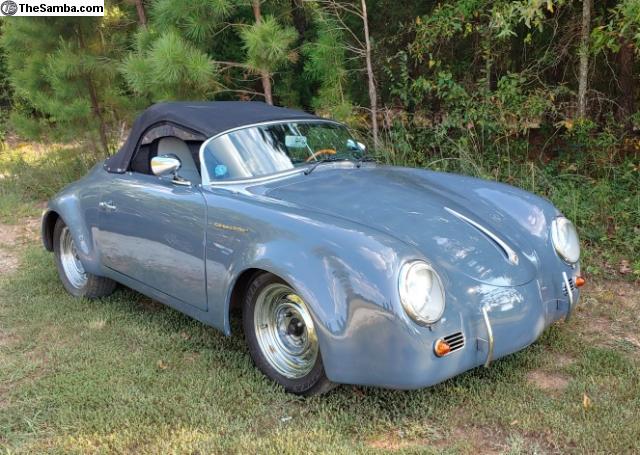 That is 1x funky top.

It needs some attention but would be a great starting point for the price to get a CMC/FF Californian if you wanted one.  Looks like a good one for Alan to snap up. What say you Alan?

Now have three projects  no room at the 'Inn"    However, if one of you guys want's great deal that is it !  Buy it and if you are shy about doing upgrades   I'll do the speedster up nice, probably could get to it later in December

There were no shortage of VW dudes rolling 48 IDAs on their 1776s a few years back. This is a really weird hobby.

Ad is deleted. Likely a scam imo, not sold Wow!  I had a feeling it was a scam.  You can barely  buy a body for that price.  I put my car on the SAMBA the same day  and felt I was way high.  I definitely have room to move.  Below is the link:

There were no shortage of VW dudes rolling 48 IDAs on their 1776s a few years back. This is a really weird hobby.

Alan Merklin posted;
That's so that the owner can spout off …." I really have a big pair "  ~

I wrote this last night but I see it's disappeared (maybe I didn't post it and the wife or my youngest closed it before I got back to it) so...

IDA's have been king (as duals, of course) since the first set was put on a drag racing Beetle (I think it was Dean Lowry?) in 1962 or '64. The street crowd quickly adopted them, no self respecting Cal Look car owner would be caught with anything else and, good or bad, the rest is history. IDA's, being more of a race (on/off) carburetor and usually too big for the engine, typically made more hp at the very top of the rpm range than any of the DCN's or DCNF's- the smaller carbs provided much better driveability (and power) at everything but the last 500 or 1,000 rpm, but IDA's were the carbs to have and that's all that mattered. In a Hot VW's article (1977 or '78?) a guy with a Bug-In winning  baby blue Cal Look Karmann Ghia (on alloys- it really was a beautiful car!) had a set of IDA's on a 1600 and went as far as having some 32 mm venturis specially machined (IDA's usually came with 37's or 42's(?) depending on what they were set up for), trying to get some street manners back. The magazine never reported how well the fix worked, but with the carburetors being so over sized for the displacement I can't imagine it worked all that well.

IDF's showed up on the scene sometime in the late '70's (and Dellorto's a couple?  few? years after) and although when properly set up make as much power as IDA's (or very close- there are street cars running low 12's and even high to mid 11's with IDF's or Dells and are much more driveable than most IDA equipped cars) they just don't have the 'Look'. The whole Cal Look thing was originally about making your street car as fast as possible, but somewhere along the way that part was lost and now unless your car has IDA's and evil little 135's for front tires it's not Cal Look (don't get me started on 135's!). Hell, guys with chrome trim and full bumpers are calling their cars 'Cal Look' these days. Blasphemy, I tell you!

Yep, big honking carburetors with no air cleaners is where it's at...

Yoda out (stepping off my soap box now, but back you know I will be!)

Sad to hear but understand the decision.
26 minutes ago

Sadly, Ed and I just posted our Carlisle event cancellation too.
32 minutes ago

I too am disappointed as I enjoy seeing everyone and have not missed a single SOC Carlisle show.
38 minutes ago

The virus is similar to the flu in the sense that it disproportionately hits those who are already compromised, whether due to age or...
39 minutes ago

Thank you for doing this so I don't have to agonize over the decision about whether to go. I am very disappointed with the whole...
41 minutes ago

Carlisle 2020 Cancellation... After holding out as long as possible for Covid - 19 situation to improve and after much sole searching,...
44 minutes ago

I'll let Carey make that choice, Paul. @chines1 , would that make more sense given the size?
1 hour ago

Smart move, Ron. Alice and I hope this will happen next year. Can we all agree that the virus really sucks??
1 hour ago

Here they are. I needed a small spacer you front and an even smaller one in the back to so the hubcaps would work.
3 hours ago
Lane. Did you consider using original 911 spare tire wheels? They are 15 x 5.5 and plentiful at reasonable prices. I picked up 5 for my...
3 hours ago
Yes sir; I know that Mr. Crosby is a pro. Robert Stoll is also another musician who’s a member of this group. As part of my earlier life...
3 hours ago

Oh, and the dash handle (aka, "Oh sh1t handle") will be original too. Nobody makes repops of those yet. Let's see those PCA guys keep me...
4 hours ago