It looks pretty good Frank! When you release the handbrake how far does it lay down? And I do see room for some more holes...

You know, I can pull my ebrake up maybe 3 - 4 clicks - That’s the extent of it’s travel.  In order to release it, the trick is to pull up slightly, then push the release button and let it down.  No big deal and it never fails to work right.

The guy who does my car inspection every year has never gotten the hang of that and invariably tries and tries until he finds me to tell me he may have to reject the car because the ebrake won’t release.   So I reach in over the door, gently but firmly pull straight up on the handle push the button and release it.  He always looks chagrinned.

So the moral of this tale is this:  If I had an ebrake handle full of holes like you guys are showing, when I got my car back from “Mr. Inspector” the ebrake handle would look like a hockey stick and “Mr. Handbrake killer” would look even more chagrinned, especially after I ding him for a new handle.

It looks pretty good Frank! When you release the handbrake how far does it lay down? And I do see room for some more holes...

I'm unsure of how far down it goes, I do know to set it, it has to nearly touch the shifter. Some adjustment is probably in order.

I am partial to the handbrake Seduction made, I'm guessing not likely I'll locate one of those.

There definitely is room to add lightness to the handbrake

"The handbrake Seduction made?" 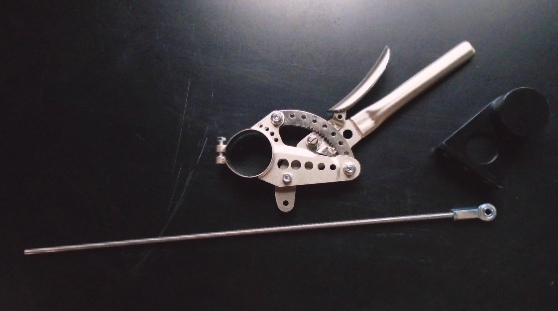 Because if so here ya go. @edsnova here are a few pics of it True that Al,
1 hour ago

Yeah, I "clocked" mine, but honestly it was still a rubrics cube to get together. The bad news is that the brake light switch ended up...
2 hours ago
My take on our "plastic clown cars" is a little different than most. While I acknowledge the paternity of our little beasts in the mind...
2 hours ago
Hi John; I have owned a Vintage Speedster for over 16 years now ever since I ordered it from the builder. About a year prior to this I...
2 hours ago

Ray is right of course! No soon to be Speedster owner's education is complete until he sees El Guapo's Speedster packing tutorial!
2 hours ago

This certainly has been a most entertaining reminiscing booklet that we need to send to @Marty Grzynkowicz lest he forgets what he is...
3 hours ago

Re: Were 356 Speedsters ever "affordable" in years past ?
4 hours ago

@Lostronin @Jem Hayward "Welcome to the Madness" known as replicar ownership. Quite a few on this site are current or previous owners of...
4 hours ago

@MarkusG , @MotoCarlo his car is for sale and it is a 2003 I believe and all sorted out Roadster or D ...There is also another but a...
5 hours ago

Believe me, I'm very happy to still be here! Vintage Motorcars Inc., it's the same maker, he does Spyders, Speedsters, and pre-A coupes...
5 hours ago

Danny that is an amazing story. I'm glad you came out okay!! Cars can always be replaced. I've heard of Vintage Speedsters. Always good...
5 hours ago
@Jimmy V. Hopefully it’s just the pump. Probably good to check for a good place to install a tow hook. I was talking to my friend about...
5 hours ago
@Lostronin John, it's my second Vintage Spyder from Greg Leach in Hawaiian Gardens CA. The first was 2002, the new one is 2016. Greg...
5 hours ago