Has anyone here used or examined this supposed FAT Performance Type4 shroud? Does it work well? 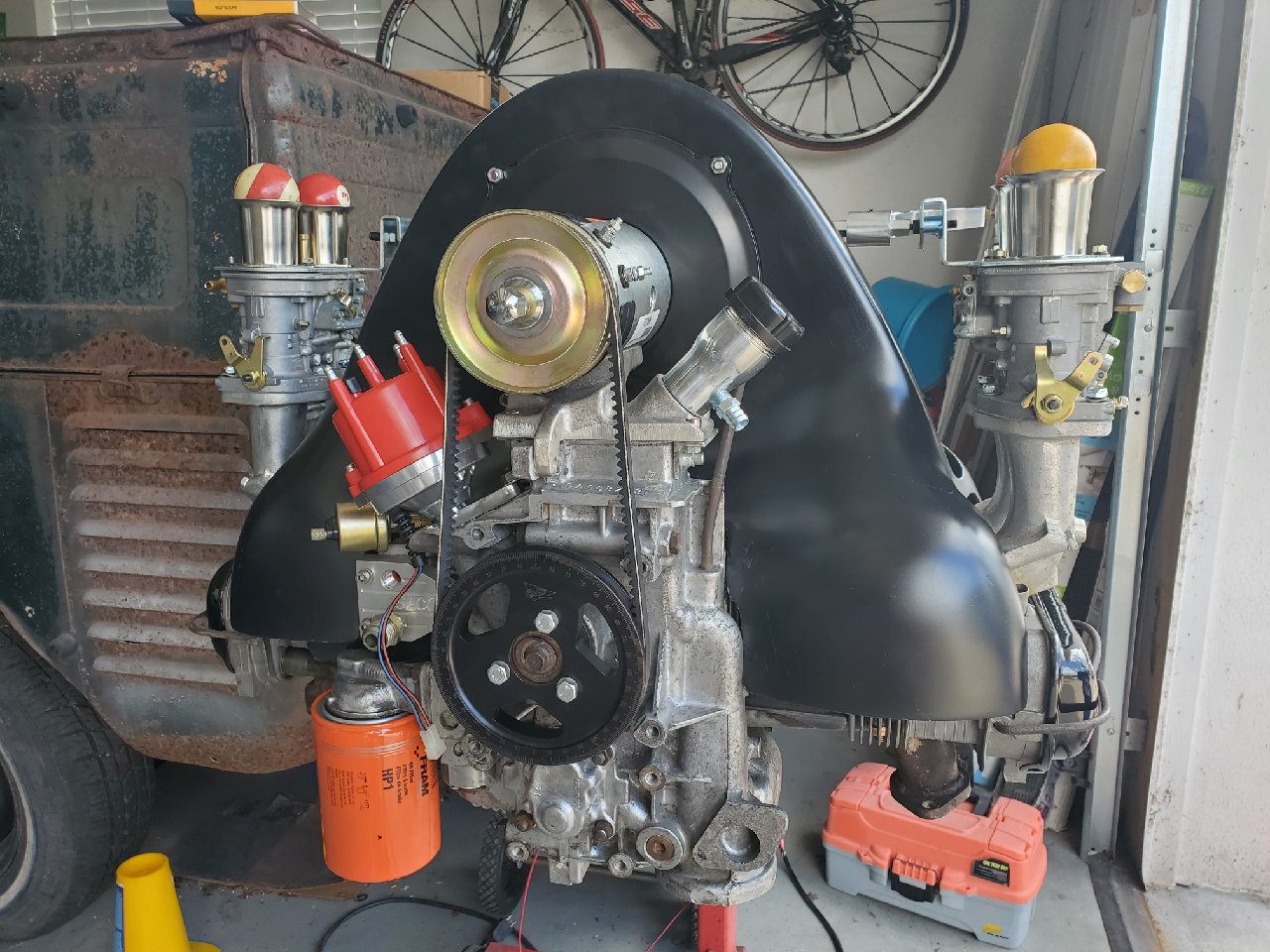 *Oh yes, fear not, I hear all of your protests that it does not look enough like one of the 2 originals. Or it's "ugly." Whatever. I think it's stupid-cool.

I can't comment on the provenance of the shroud (FAT/not FAT), but the similar T1 EMPI shrouds have a pretty bad reputation. When you think about what's happening inside the shroud, you can understand why.

The fan wheel is spinning CW (as viewed from the alternator end). The entire shroud is pressurized, but the "throw" of the fan is directly on top of the 1/2 cylinders, and on the walls or top of the shroud everywhere else. The better shrouds (OE VW, DTM, and most of the 36 hp replicas) have vanes inside the shroud to direct this air over to the 3/4 side in an attempt to cool both sides evenly. The T1 EMPI that looks like that is just hollow on the inside, and I'd suspect this one is as well (since it's made out of fiberglass and I see no rivets).

However - the T4 has a reputation for being super easy to cool, so maybe it'd work just fine. I wouldn't do it, but I tend toward overkill.

As far as the car: all of the parts bolted together on this car seem to total about 1/4- 1/2 of what the parts by themselves are worth. That says something about what most people think of it. But since you told us not to disparage the car,

I'm sure it's a great cook and has a lovely personality.

Stan's just snarky because he's upset about sticking waaaaaaaay up above that little spec of a windscreen.  This thing would be a lot of fun on the track - after getting a taller roll bar, or course.

Stan's just snarky because he's upset about sticking waaaaaaaay up above that little spec of a windscreen.  This thing would be a lot of fun on the track - after getting a taller roll bar, or course.

In what class are you planning on running it "on the track", Lane?

It looks like it would be a blast. I'm just not sure where you'd be able to use it.

"said to have been built in 1980 for use in SCCA Class C Sports Racer competition" so possibly could be historic-race eligible.

But, right: roll bar is way too low and would need to be re-made.

per the shroud, I am very aware of the CB Performance version of this (and I happen to have a vane insert that would supposedly render one of those "good") which is why I asked about it as a supposed FAT item—good eye on the lack of rivets. It's not listed in their current catalogue.

In what class are you planning on running it "on the track", Lane?

It looks like it would be a blast. I'm just not sure where you'd be able to use it.

I was thinking about track days, not real racing. There's an interesting mix of cars on the track in the various run groups.  Last time I was on a track it was fun to watch a full race tube-framed '63 Ford Falcon race car go bellowing by me.

People started noticing/pointing out that, for example, the drum brakes on the car were worth more than that by themselves. Ditto the engine. Plus the two gear boxes. Plus the spare mold for the front clip.

barncobob replied:
Vreds are good tires...My 1st speedy came with a 60lb bag of sand in front, no issues

Gordon Nichols replied:
OK - I’ll get it by mid-morning. I’ll try to get both unloaded (wheels off the ground) and loaded measurements for you. I also have a...

IaM-Ray replied:
The issue is simply front brakes can easily lock up and that happens on the front end especially if you get on a washboard or bumpy...

ken whellams replied:
Has anyone else added weight to the front end of their cars to settle the front end at higher speeds?
IaM-Ray replied:
I still would go with a good quality tire as the front of the car is so light you need the best traction you can get.

Alan Merklin replied:
Yes , if you have the axle in you can just measure from the outer lip on the trans flange cup to same on the stub axle. Thanks ~

Gordon Nichols replied:
Epilog: Everything fit as advertised, but the attach point of the cable at the pedal arm is maybe 3/8" forward from the ancient, worn...

Gordon Nichols replied:
@Alan Merklin Do you still need this dimension? Pearl's up on the lift and I can get the measurement for you tomorrow morning if you...

wardog (Warren) replied:
Thanks Carlos & James!
Robert M replied:
If you want the best ride consider using a summer compound tire. You won't be able to drive when it's cold though because the compound...

Carlos G replied:
No washers. You will need 5 studs in that thread size and pitch and 5 nuts that fit them. Or, you can get 5 bolts. Just make sure the...

Cartod replied:
I like big butts and I cannot lie 🎵

Bob: IM S6 replied:
It's as if you have found the girl of your dreams, but she's carrying an extra fifty pounds. You're just not sure what to think. Yes,...