Unless you have Gumby arms you cannot use the brakes where

My alternative method is to have a pulley

system where I Able  to pull the e brake I've never seen the e-brake in front of the shifter before.  Why would it be up there and not behind it?

When kit car was made That’s where e brake was. They never hooked it up for the reach is impossible

Since 11 inches were removed

Yeah, that’s pretty unusable where it is.

Usually the e-brake is behind the shifter. When the chassis is shortened, the excess is removed from BEHIND the front seats. So whoever shortened the chassis, done messed up.

The 10-11" were (supposed to be) removed from behind the parking brake rearward. This would leave the brake handle bracket and the cable guides in the tunnel (which get cut shorter where they stick out the back). I'd check to see if original brake bracket hole is still there and pull the shifter rod connection to see if cable tubes are there too.  Shortening the cables is easy - there is a kit for it. 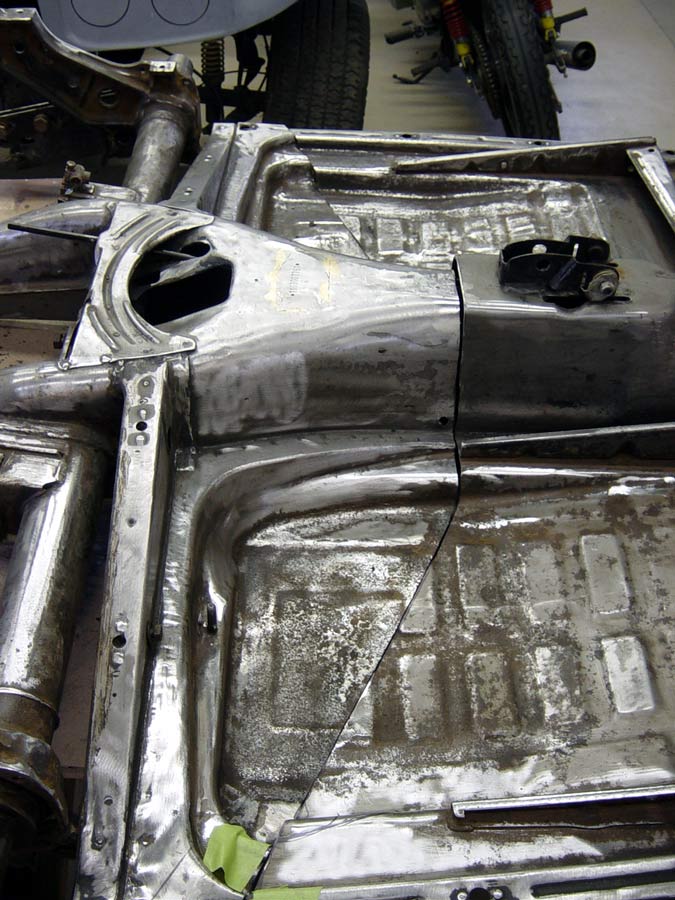 I believe the VW pan based MGTD/Gazelle replicas may move the parking brake forward of the shifter (since the nose of the replica is longer?)

Might be easier to go with a more authentic under dash 356 umbrella brake handle? So @JPC, you're saying your mechanic installed THAT e-brake in the original hole where the e-brake was when the car was still a VW Beetle? If that's the case then the builder of your car is an idiot and shortened the pan incorrectly.

I would tear out that hideous mess and install this:

@TheMayoMachine just had one installed and if I remember correctly he deactivated the annoying beep noise.

Good luck sorting this mess out, but I don't see this as a very good option. If you ever need an emergency pull that thing is not in a quick reach location, bam!!

My Speedster is done right in AZ

@JPC : I eliminated some of the issues your having, but I created a few more as outlined below.

@Robert M : you are correct.  I recently had an e-stopp system mounted in my 2003 VS.  the actuator was significantly larger than I anticipated.  It was every bit of 15 inches long but still small enough to fit in the tunnel behind the shifter.

The “beep” was almost immediately disabled. It was really annoying and rather gives away the secret of hiding the system in the tunnel.

There were a few things learned:

1.  This system ONLY works when the engine is NOT running.  In fact, if you push the button while driving nothing happens; the actuator automatically engages when the motor is turned off.  This, I suppose, was designed to avoid an accidental application at speed.

i don’t know how I feel about this yet as there is no longer any semblance of an “emergency” brake.  Although, I suppose you could hit the button and turn the key thereby initiating the actuator in a crisis but that doesn’t seem too wise a move.  Truth be told, I still call it a “parking brake” so it is what it is.

2.  A fair amount of craftwork had to be done in to the tunnel.  A removable panel was cut out underneath (to allow access) to the actuator mounted in the tunnel and is secured with sheet metal screws and a bead of silicone to keep things dry.

This allows adjustments, etc. without the need to rip out the carpet and work from the top.  Of course, this is only feasible if you have the ability to lift the vehicle at least enough to work comfortably.

Cool concept and so far so good here.

3.  I also had steel tube fuel lines run through the tunnel.  They had to be made to fit as the actuator takes up a bit of real estate.

No conflicts with the shift linkage came about.

4.  This was a rather costly modification in parts alone.  Totally worth it in my opinion.  Although crafting an umbrella handle type set up is more period correct.

Then again, not much about this fiberglass rocket ship of mine is period correct, except the overall shape I suppose!

5.  Removal of the VW brake handle ALSO facilitated removal of the heater box controls.  When I built my motor in 2019 I changed to a shroud without vents knowing I didn’t want them because they were basically useless.  I also initially went with a sidewinder exhaust so the vents were rendered useless.  I really like the clean look of the engine without the vent tubes and not having them works as I live in a rather temperate area so heat isn’t even really a “want” on my list for this car.

5.  In the end, I REALLY like this set up.  Removing the VW handle and heat controls cleans up the interior quite nicely.

Not the “best” modification I’ve done to my VS, but certainly one of the top three mechanically.  Aesthetically it tops the list though as I no longer have a bunch of old VW poking up between the seats.

Hey guys: @JPC's car is a TD replica. The chassis was never shortened, but the shift and pedals were moved rearward a foot or so to put them where the driver could use them.

Basically all the TD kits left the e-brake stick in its original location which—yup—is unusable in an emergency.

There are two ways to fix this. One is quick and dirty: just weld another handle to the original handle, only sticking upright. That gives you something to grab if you lose your brakes and are heading for disaster. It also looks a little bit (not much) like the MG TC brake handle, which was forward and to the left of the shifter. One drawback is it looks a bit hinky, if you look at it. The other is, to release the brake you still have to put your ear on the dashboard and reach for the button on the nose of the original handle.

The other way to do this job—the actual right way—involves removing the handle and cutting out its bracket, then welding a patch over the hole, and sawing a new hole in the tunnel behind the shifter, welding the e-brake bracket there, shortening the cables and bringing them up in the right place.

This gives you a perfectly functioning E-brake system with the salutary bonus of looking very much like how a TD parking brake is supposed to look. 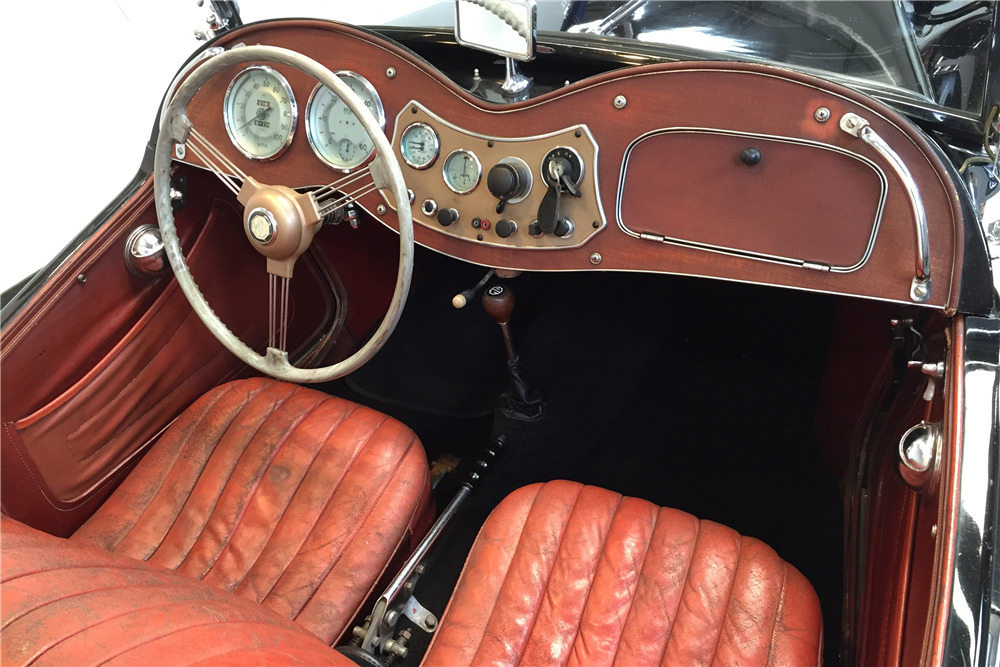 Fortunately for you-all, I did this process about nine years ago and documented it, step-by-step with photos, right here.

Yeah, that MG info should have been at the top of the page. Might have helped.

Thanks so much for your ideas

yes this is not  SPEEDSTER BUT MG

My pulley idea doesn’t work with these pulleys see attached

The welded upright handle would look like an L.

JPC
Thanks so much for the ideas of gang

There is a site like SOC for MGTD replicas - https://tdreplica.com/forums/

My postings shows yr/make/model of my car via my Profile - helpful if one is needing help for a specific car.

There is a site like SOC for MGTD replicas - https://tdreplica.com/forums/

I would consider joining, but having owned a REAL MGTD, I couldn't possibly join a replica group.

went on a few.... nice format ,scenery,people, beautiful drive,,times are a changing...maybe next year
20 minutes ago

Would love to see some side by side comparison photos with a "normal" SE Spyder before it rolls out of Bremen. I agree with Mike. Those...
21 minutes ago
Bob, Sandy is a little ticked at me. When I put the hammer down, the torque locked her seat belt when she was trying to hold the camera...
1 hour ago

did someone ask for power?
4 hours ago