The VW "bug platform" made early Speedster and other replicas economical and easy to create.  So far EV replicas have been a retrofit of an electric motor, controllers and batteries.  What if there was a universal/standard "EV platform" that low volume producers could utilize without needing to know all the EV tricks/trials/tribulations?

Good article on 356 EV Coupes being developed in UK.

This EV Platform is Designed to Help Low-Volume Automakers (autoweek.com) 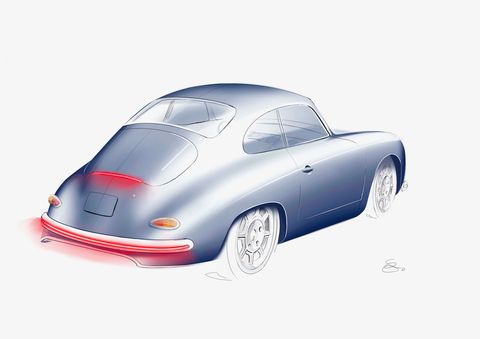 I wonder if the new owners of Devin will ever get around to making full-on replica bodies. Besides the 356, it seems like it would be a real winner. Lotus Elan, too. But you might run into copyright issues.

You can still find them and and most parts are reproduced, as in backbone frames.

I think Lotus might have a problem with an Elan replica.

Yeah, I was thinking more of a set-on body like a 356. Seems like the skateboard would provide all the torsional rigidity you’d need.

But you’re right. Lotus would have a fit. I wonder what Chaterham, Westfield, and Chesil do about the 7.

This would be a fun body to set on one, too. You can still find them and and most parts are reproduced, as in backbone frames.

I think Lotus might have a problem with an Elan replica.

Here is an interesting article from Hagerty about that very topic: Lotus Elan replica

Just picked this out of Wolfgang’s link:

“We are in discussion with several high volume OEMs at the moment around the use of classic body styles on an officially licensed basis,” he says, “what will become of that remains to be seen, but the idea is already being explored.”

Aren't the Lotus Elan and Europa really small cars for big manly Americans --- more so even than the Miata?

I fit in my brothers Elan just fine. Roomier than a Spridget by far. Same with a couple of Miatas I’ve driven. 6’2” 250lbs.

Be still my heart. Dreaming of a 250hp EcoBoost Spyder chassis-ed Gold Leaf Special liveried Elan is going to keep me up tonight.

I was going to post that I have a British friend who used to have a TVR specialist that was next door to him work on his road car. They do the same thing with TVRs.

Everything from tune ups to replacement frames and complete restorations.

Another fun body to drop on an EV skateboard. @Robert M Thanks for that article, filled in some knowledge gaps for me. I LIKE that Spyder replacement trussed frame, now that's a backbone!

My friend Mike is doing an Elan up right now, he bought a semi-ratty one and got a new chassis for it. The existing backbone was cracked but beyond repair. He's repairing all the cracked and missing fiberglass. His repairs and body work are REALLY nice. The motor is almost ready for assembly with respect to machine work being done. The rubber donut inner CV joints have been upgraded with regular CV joints.

They're no smaller than a Spyder inside and out. I like it. A lot.

I loved my brothers. It had specially valved Bilsteins and after a lifetime of Spridgets, Triumphs and Minis, it rode like a Cadillac and handled like it was on rails. One of the funnest cars I’ve ever driven. Despite what they say, a Gen1 Miata is only about 8/10ths in comparison.

...Despite what they say, a Gen1 Miata is only about 8/10ths in comparison.

Amazingly, the Miata (a real featherweight in most people's minds) weighed eight hundred pounds more than an Elan.

A friend's brother had one, so I got a few rides. I think that car must have been the source of the original 'handles like a go-cart' analogy. I later owned a gen 1 Miata. If I recall, the engines in the two cars made about the same power, but shaving 800 pounds does affect acceleration and handling somewhat.

After my Elan experience, I so wanted a Miata, I read everything I could about them. I remember a R&T article that mentioned that the Mazda engineers spent 800 hours on the Elan exhaust note alone.

The closest I ever got to one was renting them on several occasions when the expense account and rental availability aligned. Nicely, twice it was when I was doing the Bolshoi Academy shows in Vail.

The closest I ever got to one was renting them on several occasions when the expense account and rental availability aligned. Nicely, twice it was when I was doing the Bolshoi Academy shows in Vail.

Vail must have been a great place to try them out. What kind of work were you doing with Bolshoi School shows?

Vail must have been a great place to try them out. What kind of work were you doing with Bolshoi School shows?

I was the sound guy. Production Sound Designer/Engineer in Union-speak. I did it 3-4 years in the early 90’s.

@Sacto Mitch - I knew old Elans were light. I had no idea they were 1300 lbs. That's the very embodiment of Mr. Chapman's "simplify, add lightness" ethos. It's really, really cool.

However, I'm pretty sure the entire exercise would be lost on me (a corn-fed pipefitter trying desperately not to weigh an eighth of a ton).

I can just about guarantee he's German.

Actually I think you if you look in the mirror you'll find that fellow.

I don’t know, Danny, he might have been British: BITD, the line between kit car and small manufacture was often blurred. Another great candidate for a Body-on-Skateboard EV classic would be a Turner. Originally a ladder frame with various Triumph, Ford UK bits and powered by everything from BMC 950cc to Ford 105e’s and IIRC, a few Coventry Climax twin cams, and available as a kit here and in the UK.

Best of all?  I doubt there would be any licensing problems as the company had been defunct for decades.

Reminds me of our favorite red-head gearhead, Angela Lane, who once posted on here..."Aerodynamics is for those without enough horsepower"!

Sign In To Reply
Post Content
*~*~* Paid Advertisement *~*~*
Sacto Mitch replied:
. Windows? You want windows in your garage door? It's troublemakers like you, Stan, who are making things difficult for all of us. Do...

dlearl476 replied:
Are they in business again?
dlearl476 replied:
I must be living right of something. Aside from a 1-2 week delay on a pair of rear drums from JBugs (that didn’t matter anyway, I still...
Michael Pickett replied:
I, for one, welcome our new virus overlords.

Stan Galat replied:
!!STOP THE PRESSES!! I just looked at the engineering drawings of the garage doors the nicer customer service rep (Amanda) from Clopay...

IaM-Ray replied:
I hear you Stan, we had to have a sewer pipe relocated from the back yard back street to the front yard and street. New everything main...

Michael McKelvey replied:
@barncobob , it was simvastatin that I was on for many years. I switched because I read that lipophilic statins carried a higher...

Michael Pickett replied:
Straight tequila might taste a little like diet squirt if you squint your eyes and hold your mouth right. If not the first glass, then...

*LongFella replied:
I'd like this group to know I am well aware of what has transpired this past year or two and the pressures it has placed upon all...

DannyP replied:
Here you go. This was taken to show the steering wheel/horn button, not the gauges. The best I've got at the moment. I have the aluminum...