This is a 2010 Thunder Ranch "deluxe kit" with a bit already done to it. Gonna need an engine, a bunch of little fiddly bits, and a lot of hours. The car above it is Bridget, my main (automotive) squeeze. She's close to ready for the season, needing just a little more paint and a hard clean-out of the idle air control valve.

I plan to start a build blog for the Spyder later this week. I'll probably be needing some help.

Congrats on the Spyder, Ed!  Are you going Suby or air cooled?

Is that the one that was on the Samba for a while?.

Can't wait to see what you do with it!

Will you widen the fenders on this one?

Will you widen the fenders on this one?

Yeah! I've always thought a Spyder with wider fenders and a little more tire would be the ultimate skate board!

NO! No fender-widening planned. (rears on the car are 205s anyway).

Just hoping I can get through the build on my target budget. There is a bit of body damage and here and there, so the FG will be coming out. But in the main it looks pretty decent. The doors seem about ready to line up, for example.

I just read the instructions that came with the kit. Not much to them!

I know I'm missing a few parts as well. Gas pedal, for example, and one of the clamshell closer thingies.

I've also got extras of a bunch of stuff.

I'm closing in on painting Bridget, so after that I'll get after the Spyder. I'll put pictures up of everything that happens.

Is that the one that was on the Samba for a while?.

Can't wait to see what you do with it!

I don't know if it was on The Samba. I found it on Craigslist in midstate NY. The car was in Harwinton, CT, and the guy said he'd tried to sell it a couple times before but not too hard. By the paperwork, it was ordered in 2006 but not delivered until 2009. The original buyer had the transaxle built, stocked up on a bunch of extras from Fibersteel, but the economy had changed enough by then that he had to let it sail.

So my guy bought it in 2010, put tires on it, rolled it into his shop and left it there while he built other stuff (he's got a Rotary-powered Super 7 in there, and a small Ford V8 he's making for something else, and an AC flat 4 that's going in something else). Nice guy, nice shop, but the Spyder wasn't getting done.

My hope is to build this one in 18 months or so and work out the kinks for a few months or a year (1,000 miles, say), then sell it for enough to at least sort of justify the time spent. If all goes very well I'll hang my shingle out and try to live up to Alan's reputation. I hear some people really like Subaru motors but are afraid to swap them in themselves...

I have some ideas I want to try with the car. I like period details more than modern touches. But in the main, I figure I'll be in for some frustration with the build. Things like (just noticed) "do these super-cool rear disc brakes not have any provision for the emergency brake cables and drilled handle I have?"

I have the handle. 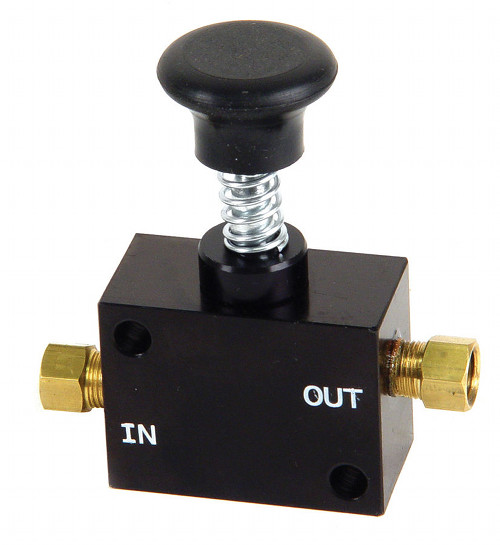 We manufacturer most of the Spyder pats you see out there for sale and supply a lot of companies/resellers. Feel free to shoot me an email with things you need and I am happy to help.  Things that we do not make and just buy, I can lead you to the best source(s)

I look at the engine "bay" of the Spyder and it just yells "transplant a Porsche 914 5 speed and flat pancake cooled Type 4 engine here."  Accessibility is like on the AH Bugeye, TR Spitfire and Jag XK-E --- everything visible and open.  The flat OEM cooling sucks air much like the 914 did - an underbody scoop would add air flow. The early rear shift 5 speeds is a natural and would not require flipping the R&P or any pan clearancing. Have never heard of anyone doing it - the 5 speed would be cheap great long leg addition (early 914 trans are cheaper than T1 trans plus lots out there due to 914 rust issues). Even the 914 heat exhangers would work or the stock Tangerine $ header system. 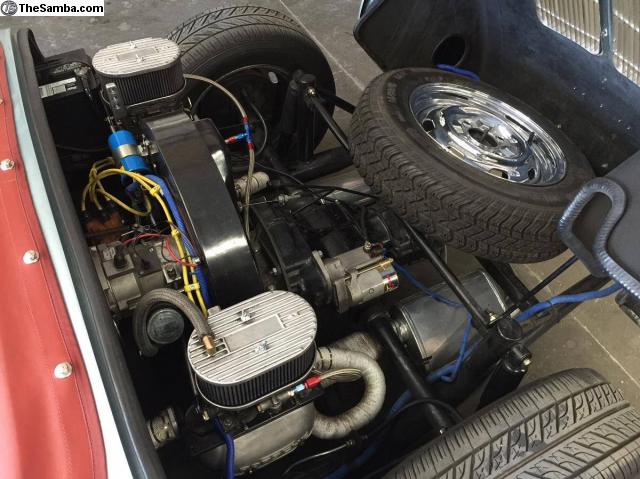 And here is stock 914 engine and trans -

Thats is one ugly engine for sure.  But still a good Idea Greg.  Would have to figure out how to make it better for show.  A Raby upright conversion for starters.

Unfortunately the 914 (901) gearbox is IRS and the only way to use them would be with a Folts axle conversion, which I personally would not trust on a street car.

As for a Tangerine exhaust, it requires modification to the main crossmember that supports the bell housing of the gearbox/engine.

Don't mean to try and "shut down" an of the ideas here just sharing based experience.

"Thinking about selling the engine out of her..... It is a Jake Raby 2270 type 4. All documented and dyno tested, Very strong motor."

That looks like @Jogyver's car!  Why in the hell would the new owner take the heart out of that beast?

Lane - You are right that was Joe's car!  Looking for a tamer engine, I guess? Didn't realize all 550 were swing axel ('cept for the longer VW pan based Perry D).  Humm. maybe a Perry D on a choped up 914 unibody w/tube chassis?

Marty - without the FI wires and computer, it isn't a bad looking engine.  In flat config there is a lot of raw aluminum showing which, I think,  looks good.  The Raby DTM makes it harder to service and eliminates the thermostat and heat (maybe not a consideration in a minimalist's open car).  Plus it adds nearly $1k to engine cost just for the cooling parts.

@WOLFGANG we have custom built some IRS Spyders (DeDion) and other companies also do a sorta-IRS rear end, but to truly do it right would take a complete new chassis from the firewall back.

Yup , that's it . The new owner is hungry for complexity and hp. Wants to install a 3.6  6 cyl. Porsche motor in it. He blacked out all the chrome too.

Im heading out to look at a 1935 ford sedan Friday . Still working on the VOlksrod . I have an awesome paint scheme that I'll post later.

Yup , that's it . The new owner is hungry for complexity and hp. Wants to install a 3.6  6 cyl. Porsche motor in it. He blacked out all the chrome too.

When Intermeccanica puts a flat 6 in a speedster, they move the rear wheels back, and do a heck of a lot of other things as well.

Complexity?...
Someone should recommend a 5 speed and then we can discuss gear ratios.

Carey, thanks. I plan to full-inventory and get this build started in a few weeks. I've still got a few things to do on Bridget to get her ready for Carlisle.

I will be in touch, for sure.

@chines1 - I think "Bridget" is his wife. Nobody here is sure how he gets away with talking about her like that.

"When Intermeccanica puts a flat 6 in a speedster, they move the rear wheels back, and do a heck of a lot of other things as well."

Yes.  That's just the surface of what they do.  I'd be very interested in how this guy is going to put a 911 engine in that car.  It will probably need extensive frame and body mods, but being a wide body makes it much easier if he's going to use the 911 suspension.  Based on his FB page, he seems the type to be able to do this.

I had my IM6 PPI done by fresh eyes as I wanted a strong PORSCHE  911 background but also some appreciation for other high end cars. The mechanic was amazed at how finely engineered the IM6 was and how truly 911 it was set up. He had worked on a few other replicas and noted the dramatic difference in the FRAME and how much thought and engineering went into the build. He was smilingly IMPRESSED that it was a 2008 build and could not get past that IM built the car......very compact and  fine detail. He also noticed that the body draped the frame to hide the 911 infrastructure.

As Bob noted above...it cannot be easy to pull it off although HENRY did. I did not fully understand the explanation of location of wishbones, towers, struts, etc. but again, you probably cant just throw in the flat 6 without? There probably needs to be some balance somewhere for the build to be CIVIL and SAFE!

Maybe you can! What do I know

Complexity?...
Someone should recommend a 5 speed and then we can discuss gear ratios.

mboyd replied:
Thanks Alan! This is another confirmation that the standard tow bar should work for me. I appreciate this advice coming from a number of...
DannyP replied:
DO NOT EVER BACK UP when flat towing. Not even for two feet. This is not internet conjecture. This is experience talking. Thousands of...

DannyP replied:
Is the Beck tube frame open on the bottom to accept the tow bar? That's the first question you need answered. The other question is...

Sacto Mitch replied:
. It looks like these are very good for going through tunnels. Beyond that, I don't know about bang for the buck. .

Jimmy V. replied:
The saga continues. I received the LE200 HAM built heads last Friday, they are a work of art to behold but all is not as it looks. I...

Kevin - Bay Area replied:
At our inaugural NV750 in August 2020, someone brought their Carrera 2 to the rally. The Carrera 2's were approximately double the cost...

benster replied:
Alan I actually did that to my last roadster. I sectioned the seat back slightly to allow it to travel further back. I gained about an...

JCL replied:
Here are some photos of the car. It appears to be a well finish car compared to some of the other replicas I’ve seen. The car has no...
Alan Merklin replied:
Posta photo of the Roadster seats , I'm sure they can be altered in a couple of ways .

Alan Merklin replied:
All the speedster projects I have towed home I have used the std. VW tow bar. You must have the tow bar on a near perfect horizontal...

Lane Anderson replied:
Made it home about 1:15 with no gas issues. The drive was... crowded - at least on certain parts - and the rain that didn’t hit Carlisle...