Any of you seen one of these?  I inherited from my father and used it in my 356A for years.  Then I had my pal QC restore it a couple of years ago.  He left were I "fixed" the handle with a pipe cleaner.  Ha, ha, ha! Why do I think 356 when I see this photograph? Perhaps those are her measurements in inches added together and converted to centimeters.

That's Madeline Smith. Years ago, I had a booth at a memorabilia show in Birmingham (UK), and she had a booth next to ours. She was selling autographed pictures from her appearances in Hammer horror movies and the like. She was very polite.

Yes, her being "very polite" would have been very nice, but if she looked then as she does in this photo...well, I'm surprised your sense of hearing wasn't temporarily placed "out-of-order" by your sense of sight! 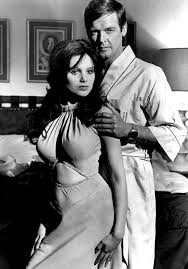 Not to worry if the car's Air Bag Light is on ~

For fun, I was going to find a picture of an old lady to joke that she looked like that then but looks like this now......

You know, the first thing my wife said when she saw my Speedster was “It’s kinda busty, don’t you think?”

Don't tell Cory Drake that. He swears his car is all boy LOL!

Don't tell Cory Drake that. He swears his car is all boy LOL! I made my own tool kit by looking through all the tools in my shop and realizing a bunch were from a 356 tool bag.  The hammer I added a decal to.  Certainly saved a bunch of money. Very cool. Some of us love stuff like that. Is there a pouch for the cue ball? I used a croquet ball as a flanging tool for my Spyder build; wouldn't think to keep it in a kit back for roadside contingencies but then I don't have half your roadtrip experience.

Remember Sean Penn in "Bad Boys" with the pillowcase full of soda cans?

That cue ball could be a formidable weapon, with a spare unused tube sock LOL!

Boys, I just placed the tool kit on our pool table for the photo.  The cue ball simply asked me to be in the shot.  Never argue with a cue ball.

Cory doesn’t have that much hair.  Otherwise they’re pretty much the same. 😈

Lane, you mean gay?  Seems to fit if he doesn't want his 356 referred to in any way as female.

I don't think so. Not trying to look like Robin, not gay. But he has a silver Speedster with dual Spyder-type helmet fairings on a turtle-back tonneau.

And black paint "darts" around the headlights. To me, it looks like Cleopatra eyes. I think most cars evoke a certain femininity, especially shapely convertibles. And definitely of the 356 variety. Since his is "all boy", this strikes me as funny.

And it's Cory, no "e". If you come down to Carlisle you'll meet a bunch of us characters in May. We absolutely revel in busting each others stones. I have a white Spyder with red seats and red darts. He likes to call mine an ambulance. And so it goes.........

Danny, do you ever race each other?

We have, a few times.

Lane, you mean gay?  Seems to fit if he doesn't want his 356 referred to in any way as female.

I'd be real careful associating  Cory Drake with the word gay.

David, why is that?

In all seriousness, Cory’s a great guy and as Danny says, we love to mess with each other.

C’mon Eric.  We’re just messing with him, and then with you.  Your sarcasm detector might need a tune up.

Cory was on this forum before it was this forum. He's at Carlisle every year, and most of us know him and he knows us. The thing is, lots of relationships here can be measured in decades. He's stayed in my home a few times over the years, and we talk on the phone at least once a week. I drove down to St. Louis for his wedding.

The dude was in the military for about 20-ish years, and saw action in pretty much every hot, warm, and lukewarm spot on the globe. When there wasn't any action, he'd do his best to make some. He'd do anything for a friend-- ANYTHING-- but if you push is buttons, he wouldn't hesitate to go all PTSD on you. He's a fireman now, and Jeni has calmed most of the storms, but it's still a good idea not to make sudden movements in his peripheral field of vision.

His car is a reflection of all of that. Elemental, and yet really complex. Rough in a lot of ways, but elegant in form and function. There's always a hint of violence, controlled or otherwise. It's fast, loud, and a ticket waiting to be written. Cory usually drives it like a puppy-dog, but sometimes he lets the Rottweiler out. And that car is a dog who can bite. It's one of a kind, and one of the coolest things I've ever seen.

There was a change of format here a few years ago (10 maybe?), and Cory lost a bunch of pictures he was archiving here. He's still salty about it so he doesn't hang out as much. Pity, that.

He's over on FB though. Look for the bald guy with the Hawaiian shirt, smoking a Clint Eastwood cigarillo. Lately he's into old bicycles. I'd approach without making eye contact, palms out, fingers spread. We'll see if he likes you.

If he does, you've got a friend for life.

Your goal is constantly to stir crap and come up with this stuff.....sooner than later that tool kit may be the tools needed to extract a well placed boot.

2020 Carlisle Shirts have been decided.

Alan, is that a threat towards me?

Lane, I am way ahead of you.

Not that there's anything wrong with that.(LOL)

someones not taking their lithium carbonate on time..

Barn, sound like good stuff.  How do I get some?

Sign In To Reply
Post Content
*~*~* Paid Advertisement *~*~*
Hey, can anyone do me a favor and save me a trip to my storage unit? Im getting ready to order my gas cap and I'm pretty sure it's a "2...
6 minutes ago
15- 356 It's almost screaming! Like I posted earlier, my only worry is that the stalk it too short to clear the clamshell hump. But for...
12 minutes ago
California 1 (Pacific Coast Highway) is a "bucket list" thing everybody ought to do once. The vistas are spectacular-- but it's not much...
23 minutes ago

Hwy 1....from morro bay through big sur and up to monterey bay is the best road....iv'e done it several times on a harley...but not yet...
2 hours ago

Hwy 1 takes your breath away... Wow, what a creation
2 hours ago

😳
2 hours ago
Agreed. Hiway 1 is a "World Class Drive." I'm always amazed at how many Californians have never driven it. There are several in...
3 hours ago

@Patrick Spike . I have a Super Widebody car for sale and you can see it on my website. https://www.replicaspeedsters.com
4 hours ago

Not one of the currently recalled models - but if a HF is near by it's worth a trip to see if they will cover it. Can only say not. We...
4 hours ago

Bobby! It's been a while since I messed with a power pulley, but the crankshaft power pulley is smaller in diameter than a stock...
4 hours ago

Boat anchors for a kayak?
5 hours ago

When this post has an update from Ed first thing in the morning, it's better than coffee!
5 hours ago

You could make a lovely desk lamp out of those.
6 hours ago