On the heels of the last shirt project, I am considering creating another SOC grill badge.
My manufacturer has informed me that the original tooling for the past badge has been destroyed. So this means I might as well create a whole new look. I would imagine that pricing would remain similar to the original one I offered at about $40 plus shipping. Though if this one got more elaborate, the price might go up.
WHO’S IN? I MEAN, IF YOU REALLY GOT OFF ON THE DESIGN, WOULD YOU BUY ONE. THIS IS A FEELER TO SEE IF IT IS IS WORTH THE DESIGN TIME AND ANOTHER INITIAL INVESTMENT ON THE TOOLING.
LEMME KNOW WITH A YES OR NO...THANKS FOR YOUR INTEREST. Pictured below is my original badge offering. The new one would have a completely different look. YES, you can all send in your creative thoughts and I will take them with a grain of salt...I have found working by design by this committee is a $hit $how that I will not attend. You either like it or you don’t. Kindly keep your comments to this oppost, or the duplicate post on the mother page.

Yes, I would be in to purchase a badge. I make signs as a hobby and started grabbing ideas for a custom SOC related sign for my garage. I was going to post it on the site to get a census for a general feel. Of course a Speedster image is the default. For what it is worth, I was going to put some verbiage like “Factory unauthorized” or “Werks disapproval” underneath it. I am still going to make the sign but put me down as a buyer.

Thanks for the initiative,

Rich - Yes for one.  I still have one of the previous design that has been waiting for a coupe to put under it.  Since the coupe will have two grills, a second, different badge would be perfect.

I'm always up for a Wisco Ricky Design product!!

I'd love a sign for my Baker Barn too.  Big enough that locals could pepper with buck shot and add patina.

Put me down for one.

Even though I no longer own a Speedster  Coupe or my 912. In other words Porscheless, I would still purchase your new badge

The interest in a new grille badge is looking good. I need to get a desigh going to peak the interest even more. I hope to create a design that you guys all love and want. Makes me feel good to make you guys feel good too.

I, too, am in for a few regardless of the design.  That said, I like the smooth edge and coloring of the original but the coupe driving out of the center on the second one really pops!

No matter the direction, count me in!

I forgot to mention: if anyone has a spare from the first run laying around (especially a paint free version) send me a PM if you are willing to part with it.

Count me in for at least two...

Rich:   Got the Shirts in today's mail.   Just Perfect.   Another out of the park home run for you.   Have an awesome New Year, Jim

"There IS A Substitute"

I definitely like the convertible over the coupe.  Mostly because I don’t have a coupe...yet!

I would be interested.  Being the minority coupe over here, if there is no coupe or speedster showing on the badge should be good for me. I still have the previous one proudly on my back grill

Looks like a potential coup of coupe owners here...

Us guys are all couped up here in the snow.

here is another example Rich this one is for Marty. 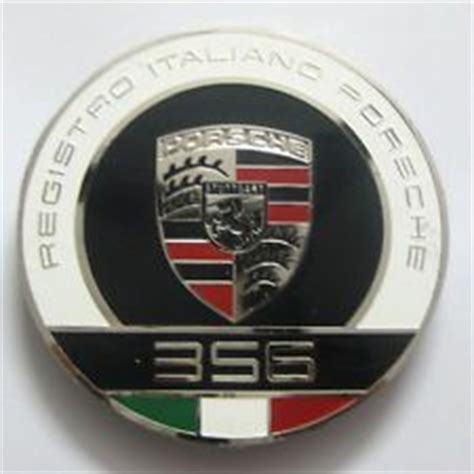 I thought I was being let out of the initial count. What am I... chop liver??

I thought I was being let out of the initial count. What am I... chop liver??

We gotta' stay tight Bro. These wind-in-the-hair, bugs in teeth guys are ruthless!

As someone listed in another thread, words like PORSCHE, the Porsche crest/seal, probably 356 are all copyrighted.  Unless Rich plans to stay in Thailand, he probably needs to avoid copyrighted stuff.  He's done a great job in past with creative designs.

I tried to get LL Bean to embroider PORSCHE on a duffle bag I ordered from them - even called and said my twin girls (bogus) were named Porsche and Mercedes.  Seem plausible to me.

here is another example Rich this one is for Marty.

Easy there Mr. Simpson.  All in jest.  Rules of the road: All political babble goes in the proper receptacle outside the door before entering these hallowed halls.  Just sayin.'

And Rich, as another great mind once said:  I like the way your mind works.  Your public awaits.  Something classy, old school will work real good.  And you'll need two in 18K gold: one for GERD and one for El Diablo.  RAVE ON!!

Personally I'd like  MAKE SPEEDSTERS GREAT AGAIN, but putting politics aside, I'd go along with SOC, Welcome to The Madness, or Speedsters. Another thought is regardless of type, they're all 356s so that would cover everyone. I'll buy 2 but Rich, please try and match the standard size of grill badge. The last one overshadows my Corpse badge and other German badges.

You know, the one thing, speedsters, coupes etc. have (with the exception of the Spyders) is the "356" model number. Is that the bridge to happiness and contentment in a grille badge for most of us?

Sign In To Reply
Post Content
Manage Topic
*~*~* Paid Advertisement *~*~*
Aye. Well said. Closer and in an area more beneficial to the driver. Thanks.
1 hour ago

OK, forgot you're still in FL, David. Not cabin fever, then. But I still can't see how total swept area would change if you flip the...
1 hour ago

Speed of who sees best at the first swipe is irrelavnt, Ray. Driver who sees most in heavy rain is most relevant. I understand where...
2 hours ago

OK, sorry David. I can understand how cabin fever might be getting to you about now: But the question seems to be why the gnomes of...
2 hours ago

Here's what a red polyurethane (note it's Sway-a-way brand!) front mount looks like after a few thousand miles- the rears didn't fare...
2 hours ago

Solved it. Stay tuned.
3 hours ago

Blast enough rubber in those young whippersnappers' faces to plug up their pimples for a month of Sundays. Basically this but with IMs.
3 hours ago

With my wiper arms at least, I think the swept area is the same with wipers left or wipers right. The swept area pattern with left would...
3 hours ago

David, I wonder if the speed and location of the first wipe is not the most important if you think about it. At least as the driver you...
3 hours ago

Mitch, wakey, wakey.... We're not talking of speed here but rather the most effective / useful total area of swept rain from the...
4 hours ago

Dune buggie guys reportedly bend the frame horns via jumps. I would think loose or broken motor mounts could do it too. Those old Bugs...
4 hours ago

Yeah, if they consciously moved the ignition switch to the left of the driver to save a tenth of a second in a Lemans start and if they...
5 hours ago

@WNGD interesting it did not sell. good question on Subie miles I was looking at Vette too👍
5 hours ago