I have some glass fiber replica seats in my Apal, that I think are made by Beck.  I like them, but the tan vinyl doesn't fit with our intended colour scheme, and having them re-upholstered locally is going to cost over £1200 which is about double what the seats cost the former owner of the car!  I'm also worried about driving the car without head restraints, so I'm thinking about changing the seats to get the colour I want and head restraints at the same time.  The Apal isn't a VW floorpan, but the dimensions are similar.  Does anyone know of seats that may come up on eBay in the UK that would fit, and in red?

You could dye them the colour you want.

I have used seat door panel dye number of times with great success and...it doesn't crack or rub off.  A clean surface prep is a must and the rest is easy. Check out these photos .

Too bad you're in UK, my brother has a set of 914 seats for sale. (But they're OEM Black vinyl/cloth insert)

I didn't know about vinyl dyes - I'll check that out, though I'm now looking at Cobra Classics as my son says they will do custom colours if you ask nicely!

Jem:  Be on the lookout for a pair of Mazda Miata (MX-5) seats.  They fit pan based cars like they belong there, look similar to Speedster seats, have headrests and recline AND should be available through online auctions and at salvage yards near you for cheap money.

Good luck with your search.

PS:  Here are mine, from an early 90's Chrysler GTS - They match the door panel and carpet colour perfectly. Is that the famed "Corinthian" leather? LOL!

@Alan Merklin that stuff looks pretty cool, and to be able to do all the seats and panels as well could solve a lot of refinishing issues.

@Gordon Nichols Everytime I look at your seats I think they come from a 911...Recaro style for sure.

My neighbor has a top of the line Range Rover for his wife.

I have seen the flatbed in their driveway picking up that car more often than I can count .... beautiful ride....when it occasionally runs right

In it's defense, it was almost always easy to fix stuff, but parts were Porsche-level expensive, there was this amazing mix of technologies from around 1938 to present day and that air-ride rear suspension was simply too expensive to fix once it inevitably died.  Still, I noticed that she wasn't especially upset when it skidded on ice, hit a pole and was totaled (she and her son were both strapped in and fine) and she immediately replaced it with a Subaru which has been in the shop exactly never.

Did you know that the Omni/Horizon(Chrysler's answer to the VW Rabbit) originally used VW short-blocks? They were 1.7 litre. The Chrysler 2.2 wasn't ready in time for production. I believe the first year they used VW transmissions as well.

Another interesting fact: the 2.2 aluminum cylinder head was designed and initially manufactured by Fiat.

In it's defense, it was almost always easy to fix stuff, but parts were Porsche-level expensive, there was this amazing mix of technologies from around 1938 to present day and that air-ride rear suspension was simply too expensive to fix once it inevitably died.  Still, I noticed that she wasn't especially upset when it skidded on ice, hit a pole and was totaled (she and her son were both strapped in and fine) and she immediately replaced it with a Subaru which has been in the shop exactly never.

I had a Sprinter work van once. It during the Daimler/Chrysler years, and was branded as a Dodge Ram but came from the MB plant in South Carolina. The truck spent more time in the (special, Sprinter certified) shop than it did on the job. It started rusting within a month of purchase. It cost nearly $40K almost 20 years ago.

I put 80,000 trouble-filled miles on it before totaling it. Similar used Sprinters were available all over for $13K +/-. I got almost $25K for it from the insurance company. It was by far the best possible outcome for me.

Pity I had to almost kill myself to get out from under owning the thing.

The rust is understandable, @Stan Galat, as that plant is here in a Charleston suburb.  EVERYTHING here rusts.  Heck, if you stand still long enough YOU will rust.

I've seen your BMW @Lane Anderson. You're exaggerating. I'm not-- that Sprinter rusted like a mid-60s Ford sedan.

Ah, but have you seen my barbecue grill? 😱

Ah, but have you seen my barbecue grill? 😱

Lane, does your rust problem have anything to do with living within a mile or two of the ocean?

More like 6-8 miles, but yeah.  It’s really more related to the humidity and frequent heavy rain than it is to salt spray.

@Stan Galat, my grill cost $200 25 years ago (and was replaced last year).  The BMW cost considerably less than $40k nine years ago.

I'm bidding on a set of Jaguar (possibly XJS) leather seats on eBay, that I think will fit width wise, and although higher than the Beck seats, there is a lot of room to lower the seat rails, so I'm hopeful I can make them work as Jaguar leather is really nice and they have headrests.  They also have electric adjustments, which may be fun to get working!

Not going to bid very high on them as they may not work...

xjs - bOTTOM CUSHIONS DON'T LOOK  THAT WIDE BUT THE BACK SIDE BOLSTERS LOOK WIDE? 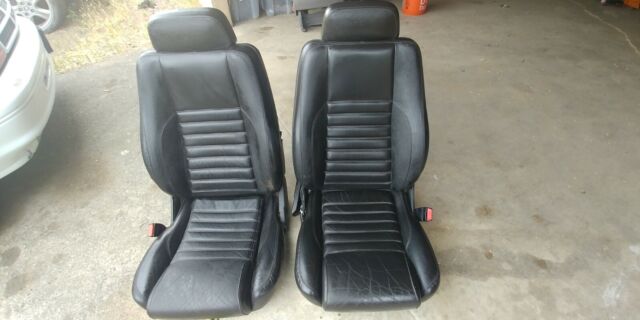 I think it may be a photography angle thing - I've been in several XJS and the seats weren't, from my memory, wider across the back than than at the bottom, also, there is more room for 'width' above the tunnel, side rails.  We will see...

I had an XJR and those seats were really comfortable....and the car was fast highway mile eater

Managed to get my two red Jaguar seats for £40 the pair, and (thankfully) the electrics all work (had to fit three new switches).  I've stripped off all the unnecessary plastic mouldings, someone had moved the switches to the front already and I cut off the mounting bracket for the switch assembly.  The seats are then 510mm wide at their widest point, and the gap between central and side tunnels (my car is an Apal with its own chassis) is 515mm so fitting will need to be rather precise.

Panhandle Bob replied:
If you have access to the latest Panorama magazine, they have a great article about a 1957 356A Carrera GT Coupe, original condition,...

Gordon Nichols replied:
@LI-Rick I hear ya. You do crazy stuff when you're in your 20's. Some of us do crazy things in our 40's:

DannyP replied:
What's "right" can be different for everybody. You've got to get the front high enough to not rub the tires when two-up, but not high...

LI-Rick replied:
@Gordon Nichols , Great story Gordon! I keep all my trailering under 75 mph, apparently my lower anatomy isn't big enough for 100 mph. Lol
chines1 replied:
@wrkinprogress JPS buys their bodies/kits from someone else and finishes them. This used to be VS and later both VM and Athos. The most...

Tom Gilchrist replied:
I've got a question about ride height. Over the weekend I set the rear wheels perpendicular to the ground with no passenger weight. I...
DannyP replied:
I'd use another vehicle then, just like Kelly Frazer did after he bought a new Accord. Kelly rented a U-Haul truck with a hitch, down to...

DannyP replied:
So you've had the car for two years and put 148km on it? That's a whole 96 miles.

DannyP replied:
Troy, what is your general malfunction? Pick an argument and stick with it, you can't have it both ways.

Butcher Boy replied:
I'm with Lane on this one. If time is short and you just need to find a way to get there, Call U-Haul and rent a trailer and a truck. I...