I've got a Beck with a Suby installed and I'm continually tightening the wing nut on the end of the clutch cable.  I'm at the point now that I can barely get him in gear and I've about run out of threads on the end of the cable. What's going on?  I don't get the "stretching" sound like I used to get on a bug that was getting ready to break.

Check everything- including the pedal and replace the cable.

@Meade  i agree with @ALB   could be the hook on the pedal shaft end ready to break?....i suggest the BIG BOY pedal assembly...that spaces out the pedal 3/4 "   as well as the bolt that holds the clutch cable end...way better set up

A Beck? Could be the pedal, could be the cable but maybe the tube the clutch cable is in has shifted. If its an old pan-based car you might be able to find and fix it the ingenious way David Stroud fixed the same problem on his old IM.

Breaking clutch cable is my first guess but the clutch arm and throw out bearing arm can also slowly crack and break - especially if you have a heavy duty clutch plate. Have someone push on clutch pedal and climb under rear to see if cable move and other bits don/t. Thanks, All!!.  I bought a cable last year but have been putting off installing it.  Done several on the air-cooled critters so I just need to check out some of the indicators first.

I quick fix I have used is to remove the wing nut and slide a 1/2" or so stack of washers with an inner diameter size that will just slide over the threaded end of the clutch cable and large enough on the outer diameter to not fall through the hole in the end of the clutch arm. Then spin the wingnut back on the cable and tighten until the wing nut is pushing on the stack of washers. This will give you the ability to adjust the clutch arm to a point it will disengage the clutch like it should. Good luck and happy motoring.

As Greg/Wolfgang suggests, the welds can break on the clutch cross-shaft. Clutch operation will be gradually affected if only one weld breaks, and completely cease when they both break. Look at the picture Greg posted on the right with the red lines. The weld breaks at the joint between the shaft and the throwout bearing arms.

When rebuilding a transmission, the clutch cross-shaft should be checked closely and the brass bushings replaced and greased. This is an often forgotten or missed step, besides greasing the clutch tube when replacing the cable.

Also pay attention to a proper arc in the Bowden tube, that can affect smooth clutch take-up and make it seem like you don't know how to use a clutch.

This cable needed continuous tightening as the pedal continued on it's path to the floorboard.  Now, when the pedal is on the on floor, it's nearly impossible to get it into gear.  so my project for today is to get the car off the floor and pull the pedal assembly.I'll check out the arm on the cluster and determine its' functioning. The Bowden tub has remained in the same position since I've had it.

Stick a screwdriver between the wings and twist.

I LOVE this question!

I work with racing shells (rowing) on the side. In the rowing world, the shells have wing nuts under the deck to hold the tracks on. They're often tough to get to so some individual came up with a wooden dowel with a slot cut in the head of it so you could reach under, jamb it onto the the wing nut and loosen/tighten -it became known as a "woody". No, I'm not making this up.

I was at a regatta once where I was on one end of an men's eight (approx 55' long) and my buddy was on the other. We were prepping it for the next race. Along came the head coach, tall slender, good looking woman. She looked at my buddy "Terry, do you have a woody?" Well, I buried my head in the hull but my buddy could see me loosing it. He replied "Not now Lizzy, may be later." She stomped off leaving both of us with tears in our eyes.

The place where the threaded cable end is put on the cable (what's that called, anyway?) fits an open end 13/64" wrench.  If you use that wrench (or vice grips) you can turn the wing nut with your fingers.

@Meade, I have never had any trouble turning the wingnut but here is a tool:

What @Gordon Nichols said- the welds that hold the guide tube in place have been known to break loose, especially when using a heavier than stock pressure plate.  And what @DannyP said about the fingers on the throwout bearing shaft- it's not unusual for those to break loose with heavier pressure plates as well.  I've never seen/heard of the arm that attaches to the shaft (that the wing nut sits on) bend or break but anything is possible.

There are several places that sell versions of @Michael McKelvey's little tool (sorry Michael, I didn't mean to infer... oh, forget it!)

I thought Beck cars didn't really have a sealed tunnel - unlike a VW pan based car - since they have a tube chassis?  I'm guessing the shifter and cables are cover by carpet or maybe a removeable piece of meta/fiberglass? 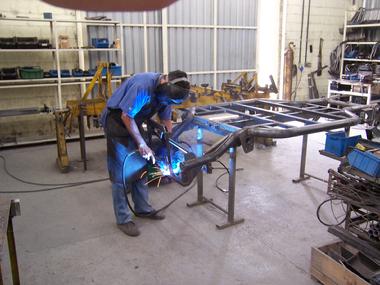 They have switched to a new frame design and I don’t know what they do now, but the round tube frame shown above has a 3-sided rectangular tunnel welded in. Bob the underside of the car there are fiberglass panels glassed in.  In later cars the one under the pedal cluster was removable.  I had to cut the fiber glass holding it in to make it removable, but doing so sure made access to the clutch cable easy.  You can change the cable without removing the pedals.  Much easier!

I have a lowly CMC

And as such it doesn’t have that spiffy access panel on the bottom of the tunnel as Lane had.

When my clutch tube let go at the welds, the clutch acted just like yours, Meade.  I got out the angle grinder with a cut-off wheel and, zip-zap!  I cut a door in the passenger side of the tunnel for access so I could re-weld the front of the tube to the anchor bracket.  Adding a 3/4” wide strip around the edges of the plate removed turns it into a panel that can be re-attached with screws for future access.  Unlike Lane, though, I don’t have to get the car up in the air to gain access - Just flip up the carpet and unscrew the panel.

Easiest way to change a clutch cable in a Beck Speedster with our old 3" round tube chassis is through the pedal hole just like a Beetle.  Same VW pedals, etc...  There IS an access panel underneath (5 actually) for easy inspection but it can be difficult to hook the cable end to the pedal hook from underneath like that.

New Beck chassis use a completely different design, different pedals and hydraulic clutch as a standard.

Maybe this is just me, but if the cable all of the sudden needs a ton of adjustment (and hasn't broken yet), I'd be thinking really, really hard about the throwout bearing coming apart. It happened to me last year, and it was ugly. Very, very ugly.

Wolfgang....In your two photos of clutch release arms, one is a VW but what is the other ? Is it a Subaru ? If so, was the crack created by using an extreme spring tension pressure plate ?..............Bruce

Great posts above; first thing I would check is the cable itself. The strands can start breaking one by one and those are the symptoms; you start losing pedal efficiency and the travel gets longer for the clutch to activate. The next thing I would check, as Gord and others have so eloquently pointed out, is the clutch tube's welds in the tunnel failing and the tube coming totally loose.  You'll have to remove the pedal cluster so the third thing I would check while doing that is the little clutch pedal hook where the clutch cable hooks on to. With enough use, those start wearing out a groove to the point that the hook is almost breaking off. That little hook replacement is also readily available from VW part suppliers.

The one with metal fatigue crack is a Honda - I had same issue on a 22RE Yota PU.  I replaced slave cylinder and bled system 10 times before I pulled the trans.  I could tell the arm wasn't moving much but blamed it on slave cylinders.

TwinCitiesSpeedster replied:
That is just for their Spyders, but the Speedster prices have continued to creep up as well. Supply and demand. I’m sure it doesn’t help...
barncobob replied:
getting into Porsche pricing and getting a really nice used 911

Jim Gilbert - Madison, Mississippi replied:
Looks like there's little interest in this subject... Not enough Speedster/Spyder owners down this way. Any of you American loving,...

550 Phil replied:
Sam. Thanks. Going to read every word of your post when I get a minute. If I can find a new speedster to look at either in Bremen or...

Sam Brown replied:
It’s mana from heaven, @Lane Anderson . Everyone posting their pictures and seeing the collective progress is great fun, one of the...
NJ-SpeedsterGuy replied:
Great news! Glad to hear that she’s officially registered and that you’re starting to drive and enjoy your speedster. If you have the...
chines1 replied:
I need to take one more long drive after filling up the tank completely and see how the splash back valve and the reroute of the vent...

Lane Anderson replied:
Geez Sam, I clean forgot about your build. We have a regular plethora (love that word!) of Beck builds happ'nin'!

Kevin - Bay Area replied:
Pardon my ignorance. It’s been some time since I saw a Beck Speedster in person. I was wondering when was the padded portion of the dash...

dlearl476 replied:
Seems like he’s barely getting on it. But then, I guess if I was a dealer driving a half million dollar car, I wouldn’t be thrashing it...
Michael Pickett replied:
Congratulations, Warren. Glad you are on the road!