I agree. It looks great and you should only mess with it if you get complaints from your sweetie.

You are probably the only one to notice the imperfections, it's better to let it be than to unintentionally make it worse .

Think of it as Patina. Probably painted better than any one that left the factory.

I like your clamshell prop better. I'm pretty confident that Al does, too.

Car is still for sale. 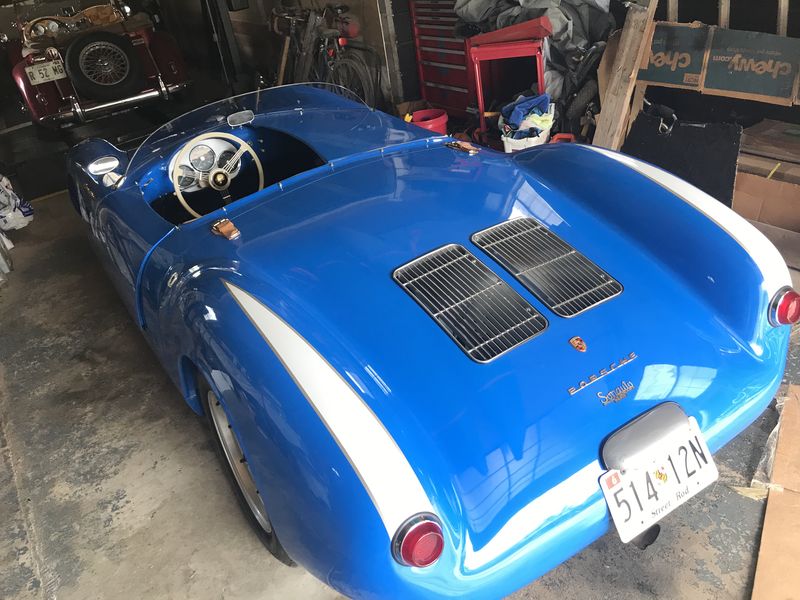 I like your clamshell prop better. I'm pretty confident that Al does, too.

Good eye, Michael; it took your pointing it out for me to see it, and yeah, it's way cooler than the original!

Yours is truly bespoked to your specification, your looking for someone who can appreciate the nuances of such a build and they are out there.

Like @IaM-Ray said. You have an amazing eye for detail. Combined with your fabrication skills and patience, you've built a one in a million (or in our case, maybe a few thousand) auto that any discerning collector will appreciate. It is just a matter of finding the right match. Good luck!

And... did we say you did a lot of unbelievable research to find all those nuances.

Just reposting the latest blog update. Cold start after 4 month's rest, shakedown, and a little engine sound compare/contrast with a real one. I fired mine up today after a 3 month hibernation. Gotta love Battery Tenders and ethanol-free gas. Fired the Monster up, too. Same same.

@edsnova Love how you roll it out prior to start. I do the same.

Huzzah! I'm wondering if that brake pedal arm is going to bend if an elephant wants a test drive. Amazing attention to detail, Ed! Neato. Did you make that?

Give me a lever long enough, and a place to stand...

Neato. Did you make that?

I did look into making one but for the money Fibersteel made more sense.

And, for the record, I do not have the stones to actually jack the car with it. Yes, it should work, and it can obviously hold the car up, but the angle you start at with that little cup on the jack point does not inspire confidence.

For the picture I lifted the right side with a floor jack and then slipped the lever jack under the left side.

...For the picture I lifted the right side with a floor jack and then slipped the lever jack under the left side...

Is there nothing I can believe in anymore?

Is there nothing I can believe in anymore?

I don’t want the truth.

I can’t handle the truth.

Ed uses words like ‘barber pole vinyl’, ‘autopulse fuel pump’, Wendler badge. He uses these words as the backbone of a life spent defending something.

Deep down in places I don’t talk about at parties, I want Ed in that garage.

I need Ed in that garage.

This car is still for sale. DM me if interested.

Ed, I am utterly confused that someone hasn't bought this work of art.  It'll happen.

Three Saturdays ago when I tried to back into a space at Cars & Coffee my shift lever popped off. Disconnected at the base, stranding me 15 feet from my destination. Luckily it was in neutral. I dragooned a couple of bystanders to push the Spyder into the slot.

I quickly found it wasn't broken. Just disassembled. The lever screws into a socket near the floor of the shift housing, and somehow it had backed out. A few minutes later I'd turned it back into place with some borrowed pliers (thanks to this kindly UniMog-with-grenade-launcher owner). And I was happy, because I now understood why my reverse lock-out feature had been getting funky.

The stock Brandwood shift lever is a complicated thing. Really it's two levers, one nested inside the other, so the outer one can be pushed down to allow the lock-out nub to dip below a gate to get reverse gear. As the inner shaft unscrewed it made the whole thing slightly taller—too tall to allow the outer shaft to be pushed down far enough unless I opened up room above it by backing the knob off a turn or two. I had cut and welded on that box several times during the build in an effort to make it more compact and Spyder-like, yet never took it apart to see how it worked. Now, seeing how it went together, I also realized how easy it would be to replace with a longer stick.

One of the silly things I added to the box was a reverse lockout lever, the similar to the originals. Turns out it works as intended, so to make the shifter "realer" all I needed was a simple stick, not a nesting doll arrangement.

The other night I got to work.

From what I can gather by photos, the real cars' shifters were about an inch and a half taller than the one I was using, including the extension I scabbed on during the build.

Out of the spare parts bin I grabbed a likely-looking old shifter and cut off the ball end.

The shaft screws in with a 3/8-inch threaded rod at 24 tpi; standard SAE fine threads. Of course I had every kind of bolt but that one, so I ran to HD and spent $3 on two Grade 5 (they didn't have 8) zinc-plated bolts.

Cut off the head of one. Drilled out the bottom of the cut shifter and mocked up the parts. That loop thingie is what controls the big fore-aft cable. It's about a quarter inch thick. I was going to use a nut for my version but found a piece of quarter inch plate with the requisite quarter-inch hole drilled through it on my work bench. A little surgery with the angle grinder and... Once installed, the loop for the cable keeps it from backing out. The only thing missing now is the correct mushroom-shaped knob. I believe they are available commercially, but if anyone has one loitering about their spare parts bin, I'd sure like to have it. 12mm threads. Why is it, it's always the guy with the grenade launcher who's most likely to have tools?

Why is it, it's always the guy with the grenade launcher who's most likely to have tools?

Ed's beautiful blue Spyder -- the gift that keeps on giving.  59 pages and counting. I think @Lane Anderson had the old record.

My philosophy as well.

I had a shift knob that was a certain mm,,shift lever was too thick,,had a machinist rethread to proper diamater...problem solved

Update: found the shift knob I knew I had. That looks like an early VW shift knob.  Did they use that on 550s, too?

The knob I have is a Bug knob as supplied by Vintage Speed. Spyder knob is a li'l different and I don't know of a supplier of the exact correct knob. Here's another int shot with the shifter displayed. This is from a Mechum auction of an Alloy Cars replica. Went through the archives and found this of a 502 Motorworks high-end replica (from Monterey a few years ago). This looks like what you are describing, but maybe shows it in better detail. It's a mushroom shape, but a little different from the Bug mushroom.

As any scoutmaster will tell you, not all mushrooms are the same. If all you need is the knob (guessing Fibersteel won't sell that as a separate piece), this looks like something that would be a good candidate for 3D printing — and you could spec threads that fit your shifter.

Sign In To Reply
Post Content
*~*~* Paid Advertisement *~*~*
Remove This Ad
Remove This Ad
Sacto Mitch replied:
. If all you need is the knob (guessing Fibersteel won't sell that as a separate piece), this looks like something that would be a good...

Sacto Mitch replied:
. Nah, drill the bolts the wing nuts are on and use cotter pins. Springs are dorky a.f. .

DannyP replied:
Stan, I have a pair of non-rusty single port tins with your name on them. I'll throw them in the trailer.

DannyP replied:
Same as you Kelly, but covered for 40k agreed value. I need to update that, it isn't high enough.

DannyP replied:
Stan, that looks great. Don't listen to a guy with a wannabee MG on a VW chassis and powered by a Subaru. Now THAT'S dorky! I'm not...

Stan Galat replied:
I see (now that I've snapped a picture) that I'm missing a wingnut on the 1/2 carb. Replacing it may be the extent of my care for this...

Michael McKelvey replied:
The configuration around the spark plug holes is different.

edsnova replied:
As @Stan Galat advised (and I think @DannyP will concur) " turbo hats " are just the ticket when aiming for performance over looks. They...

Michael Pickett replied:
But the price...

Stan Galat replied:
Unless I'm mistaken, the only difference is the size of the holes for the manifolds. As I have to hog them out for a "big-beef" CB...

Gordon Nichols replied:
@Michael McKelvey wrote: "I am still sometimes surprised by how little I can get done in a long day in the garage." Boy, ain't THAT the ...

Michael McKelvey replied:
@dlearl476 , my shroud and flappers are installed. The rod from the flappers seemed to move freely before I bolted everything together.