Classified postings do not allow for discussion (replies are not allowed).  Direct message the member if you would like to discuss the item.
If you would like to edit your listing after the editing window has closed, please contact us HERE.
The Classified section is open to any individual (non-commercial firms) posting of items for sale or wanted. Members posting commercial advertisements must be enrolled in a Supporting Merchant program. 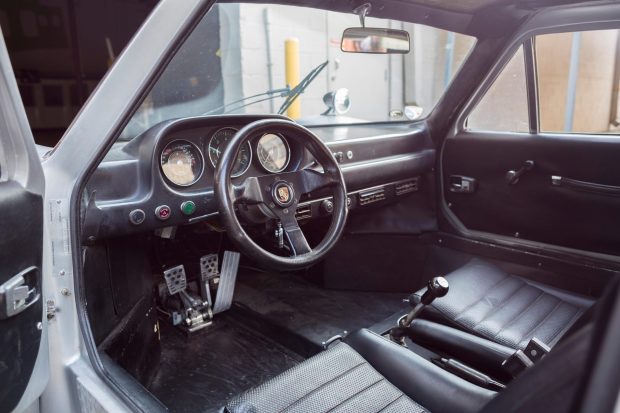 That interior looks absolutely humongous!  I thought they were always very cramped.  Rebuilt title is a little discerning.

I couldn't get Ed's link to work so I'm reposting it:

@WOLFGANG I don't know how tall the owner/driver is in the driving video but his knees are right up under the dash. *****EDIT***** Driver/owner stated in the comments section he is a little under 6' tall.

Body doesn't look like a Martin & Walker, they are very faithful to the original shape(available in the UK). I do recall Thunder Ranch was working on a 904, but I don't recall them ever offering a kit or a finished car.

Avanti? Don't remember that at all.

The fenders look "Beck" but I know it's not one, as stated. Chuck flared the fenders so modern rubber could fit.

It said it was built with Chuck Beck's help by Avanti back in 2000.

I wonder if Chuck’s involvement in this project  inspired him to do his own.  The timing would be about right.

But it is a project. Key issue I suspect is cooling—engine and turbo both. Heater core, A/C, etc. are farther down the list.

I think it's real viable with a worst case scenario going back to a stockish NA four-cam EJ25 at 200-ish hp.

Or a monster Type 4.

Or a built NA Sube such as this.

But it is a project. Key issue I suspect is cooling—engine and turbo both. Heater core, A/C, etc. are farther down the list.

I think it's real viable with a worst case scenario going back to a stockish NA four-cam EJ25 at 200-ish hp.

Or a monster Type 4.

Or a built NA Sube such as this.

I believe the owner addressed the cooling question in the comments section. Says it's never been over 210. You'll remember Jim was chasing demons in his cooling system right up until he found a piece of equipment stuck in one of the tubes Beverly restricting flow. Since he removed the foreign object he hasn't had any cooling issues I believe.

Hope it's true. Such a great car and fewer sorting problems is always better.

The body is out of my molds, but thats where it ends...  The rest was done at Avanti (and at someone's home) long after Dad and Chuck finished their Avanti contract and parted ways.

I know I am very picky to begin with, but I just see SO MUCH done wrong...

It's only at $35K with 2 hours remaining. Probably not going to make reserve if there is one.

Shogun, because it had a Taurus SHO motor!

Definitely can see it though, as it's too much of a project for the non-wrench. And BaT is chock-full of guys who think the lack of a 911 motor in the car is to its detriment.

@RCosta That was the plug for the current molds, pulled from a pair of originals and then modified to our current spec.  The SHOGun was a fun project, built 9 of them before Ford just made it too hard to do (actually barred CA dealerships from selling to us, in fact Leno had to buy his own donor cars LOL).  And that original prototype Polo motor... what a blast that was.  We ran it in a Spyder for many years and then refreshed it for a project that never happened and it is now in the hands of Rod Emory.

@edsnova Everything GTS (904) we have built is 911 powered, and while Ive had several guys ask about other drivetrains, they have all wound up Porsche powered 6 cylinder (we have a few Cayman/Boxster powered cars int he works).  Average GTS leaves here just north of $100K, and currently our used cars are trading in the $120K range.  As for the BAT car I really hate to say anything bad about someone else's project, especially that they are obviously proud of, but since you asked...  there is just SO MUCH wrong about it in my opinion.  Suspension in single shear, brackets holding brackets, odd spindles and steering with WAY too many universals in the steering, pedal position, shortened 4 link bars in place of a-arms, homemade hinges, a pilar covers are installed upside down, to name a few.

Yeah, @chines1. I looked through the pictures until I saw the single shear suspension fittings and just closed the browser right there.  Death trap engineering no matter how good the rest might be.  Purchase price, plus the necessary refitting, and it's better to let you do it from scratch...and it would be cheaper.

Sign In To Reply
Post Content
*~*~* Paid Advertisement *~*~*
pinot64 replied:
many thanks Jon!
Jon T replied:
@pinot64 Here is a link to a recent thread with information about some So Cal area mechanics.

pinot64 replied:
Thanks, I will try that but I am afraid they are way too busy. I am hoping to find a good VW mechanic with some experience on these cars.
WOLFGANG replied:
Years ago I purchased this rear VW hunk from Virginia Beach - got title/VIN and a '74 3.88 transaxle. I knew it was bad and got great...

AmericanWorkMule replied:
@DannyP @Stan Galat I asked the Seller, more for curiosity because creating one is way beyond my capabilities, and he graciously...
Alan Merklin replied:
Give Vintage Motorcars a call (Greg) they are swamped with builds but perhaps they can get to you. Contact Us - Vintage Motorcars of...

Robert M replied:
For anyone that wants all of the modern conveniences with the manual operation of a Speedster top just needs to get a new Porsche 718...

edsnova replied:
Great thread, gentlemen. To recap, then: 1. A/C in a Beck absolutely will "keep up" with a Florida Summer. 2. Get a high-bow top with a...

IaM-Ray replied:
Maybe the plan should be to try and sit in a few to see how well you fit in them and then try different manufacturers. The Convertible...

Jon T replied:
@Benjamin one more thing to consider to help ensure a bit of headroom with the top up, have the pan modified to allow the seats to sit...

RoyP replied:
Greg at Vintage Motorcars of CA has a dealer in Canada so certainly it can be done. Can't you title it in Florida and just bring it to...
Stan Galat replied:
A thousand times, yes!

Benjamin replied:
Sounds like somewhat mixed opinions on the topic, so I guess I'll just have to find out for myself when the time comes but this has...
Kevin - Bay Area replied:
^^^ That remains my favorite modern era Porsche. The size is in keeping with Porsche's origins. To me, this car is worthy of the Spyder...

IaM-Ray replied:
What about this one