I'm looking for new or used seat tracks for my CMC.

I'm finally resurrecting my speedster after sitting for way too long.

A pair is for 1 seat

I used some nice Honda tracks I got at the used auto parts place.  I can't remember what model. 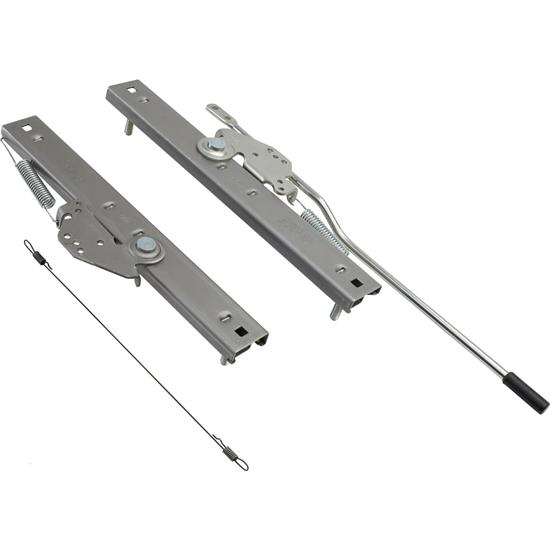 I have a set that I took off of my seats from my Spyder. Let me put my hands on them and I'll post them up.

Well, this is interesting...

I got the quote for seat tracks  from https://www.vintagespeedsters.com/parts/

and then Wolfgang sent me this

The email I recieved from vintagespeedsters is signed "Vintage Motorcar"

Are there 2 companies named Vintage ?

Well, this is interesting...

I got the quote for seat tracks  from https://www.vintagespeedsters.com/parts/

and then Wolfgang sent me this

The email I recieved from vintagespeedsters is signed "Vintage Motorcar"

Are there 2 companies named Vintage ?

It's confusing I know. But if I were you I'd buy from Greg at Vintage Motorcars because he's done a lot for this hobby.

It's confusing I know. But if I were you I'd buy from Greg at Vintage Motorcars because he's done a lot for this hobby.

For a bit more background, Kirk was located in the Hawaiian Gardens location since his beginning. Greg's father set Greg up with the molds and jigs for the former ACI Spyder.

Greg started making Spyders around 1995 or so, then moved to Stanton CA at some point. There may have been one more address in there at some point, but I don't recall it.

When Kirk and Mary decided to retire, they sold the business to a Justin(??) who immediately moved the business to Arizona, and did it over Christmas vacation. Kirk's former employees were left in the lurch. They all thought they were just going to be working for a different owner.

Greg Leach got wind of this and proceeded to a) hire all Kirk's guys and b) move his business BACK to Hawaiian Gardens where he started. At that point Greg started making Speedsters, and bent-window coupes(which he already had in the pipeline). He still makes Spyders also, and does air and watercooled(Subaru) in ALL three cars.

As a disclaimer, I have purchased two Spyders from Greg, one in 2002 and the other in 2016. He makes a great product, and has improved the function of the cars(less initial problems) and certainly the fit and finish.

I believe that the Arizona operation is on it's second or third owner since moving there.

I don't know about you, but I'd spend my money in a business with some longevity.

The only choices for me would be either Beck/SE, Intermeccanica, or Vintage Motorcars in California. They've all been around for years, and have great customer service, even after the sale.

And Ditto on the Greg reviews (Vintage Motorcars of CA).  Stand up guy.  He's building my coupe.

As an aside, I bought a pair of those $24.95 beauties from Speedway Motors and they were OK, but that's about it.  Best thing about them is that they're under an inch high so if you're looking for really low seats they fill the bill.  They offer a different pair from Sparco for $80 that I would assume is much better quality.

In the end, I swapped out the Speedway $24.99 glides for the Chrysler glides that came with my seats and the quality and glide action is mucho better.  If you really want some el Cheapo glides, PM me and you can have my Speedway pair if you pay shipping.

What type of Chrysler glides did you use ?

"What type of Chrysler glides did you use ?"

1992 LeBaron GTS.  The passenger seat was anchored in place.  The Driver's seat could move forward/aft.  Both seats recline.

edsnova replied:
Those look too small to be oil lines.

Dennis Connaughton replied:
Thanks. Sad that there are so many people out there scamming.

wombat replied:
I'm away from my computer but will add to library asap.

Robert M replied:
@Dennis Connaughton If you have any questions about the legitimacy of any car feel free to post the link and your questions here. You'd...

IaM-Ray replied:
Yes and we are hoping he still likes the smell of petrol for many years

Dennis Connaughton replied:
Thank you Roy! I had sent you a private email. It just seemed too good to be true for a Beck. I asked the guy to fly out to see car but...

RoyP replied:
Now is a great time to also warn unsuspecting buyers of all of the scams that are out there on Speedsters. Given their popularity these...
mtflyr replied:
Like everything else you can’t get near a good Bugeye for that kind of coin. I have a ton o $ In both of mine😁👍 Pete