Hey guys, I have read some threads about short wheelbases. Mine is 1” almost exactly too short. I bought it already shortened. Before I get to worried about it, I have a question.

My pan is a 1974 Super Beetle, with the front end conversion kit to hang the torsion bar. Manual doesn’t say anything about shortening pan differently “if you are using the Super Beetle conversion......shorten pan only 9”....”  etc

So, can someone measure the distance from the front of their standard pan behind the pedals to the centerline of the torsion bar tubes? I want to see if the conversion kit is actually shorter by that one inch.

If you send a measurement, please let me know exactly where you measured from on the “firewall” end.

Any thoughts you have on that conversion kit business would be welcome too. I have considered cutting off that pan head and welding on a regular replacement pan head.

I saved these old pictures of the CMC Super Beetle conversion kit - NOT MINE. A lot of replica owners' comment of the front wheels not being centered in the front wheel opening.  I've found pictures of real Speedsters with the same slightly rear appearing wheels so I think it is OEM.  Now you can add longer bolts to the H beam along with castor shims and move the wheel forward maybe 1/2 inch or make custom spacers maybe from steel pipe. 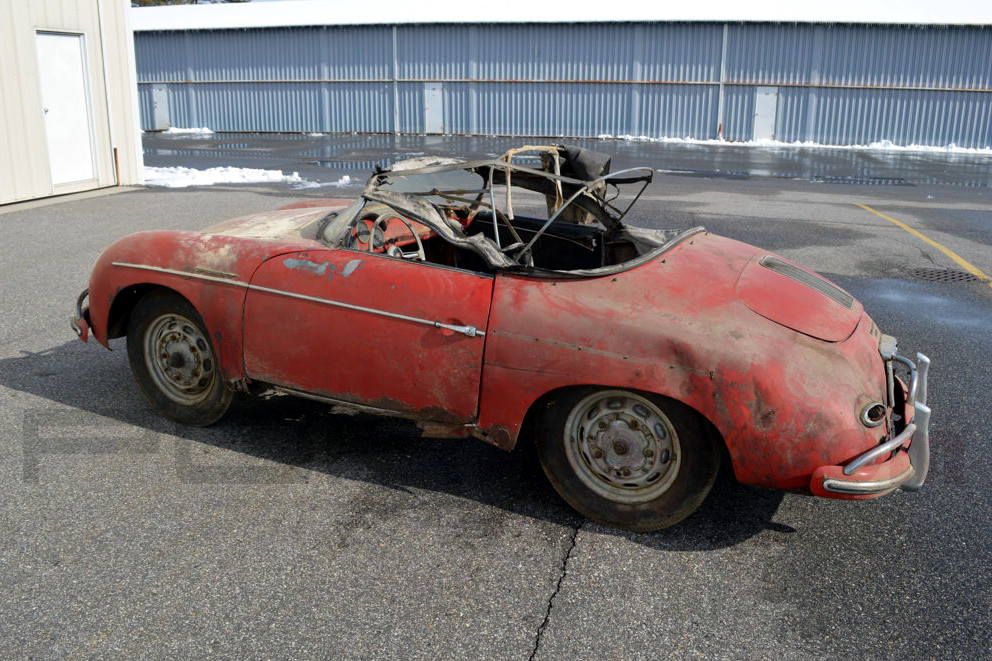 Here is a pic of an original with the front tire set back.
-=theron I have noticed that about the originals not  being exactly centered.

I’m concerned about if that 1” will make any handling difference. Since it had that super beetle conversion for the front I thought that may be why it’s short.

does anyone think the 1” too short matters?

did anyone have a chance to measure their standard front end?

I read over the mounting for the SB conversion and I shortened a std beetle chassis.

The SB conversion uses the pair of bolts each side to connect to the ends of the arched cross piece (on which the brake master cylinder is connected) so unless the SB conversion kit is produced too short - the short fall isn't there.  The chassis shortening (10" or 11.81" depending on if you count the overlap) relies on those same pair of bolts in the front and one either side on rear "shock tower" piece.  SEE circled mounting holes to left and right of builders diagram For years Beck SE has welded the front H beam in place to their tube chassis.  I could see you doing that if you wanted the wheels more forward - just remember you want the car lower than a stock VW (most likely) so you need to get castor right (once welded the castor shims, of course, no longer work.

My car isn't near by right now but I know the measurements for wheel base have been listed here before.  Just don't recall them.

How did the Super Beetle Conversion plate work? you might ask.

Then, it picked up the lower mount positions of the MacPherson lower suspension A-arms, as well as a couple of places in the central tunnel to anchor the front of the plate and position the beam mounts.  Because the plate used existing VW mounting points, the only place where the spacing might be screwed up was between those forward mounting points and the beam mounts (the rectangular tubes sticking straight up with half-moon pieces cut into them).  You can see those forward mounting holes in the plate in Wolfie's first photo.

Anyway, there isn't a lot of area there to move the beam mounts back 1", plus if you simply measured a pan car from the center of those four bolts at the cockpit corner to the rear of the beam mounts you would know where to place them if you were building a conversion plate from scratch.

I would be hesitant to try adding 1" spacers between the beam and the upright beam mounts because you're now adding a vertical torque arm at those mounting points that could fail over time.  That wouldn't be pretty.  It might be possible to create some new beam mounts just like those in there now but 1" thicker front-to-back and weld them right to the existing beam mounts to push the beam forward.  Remember that doing so will move your steering column forward as well as your steering wheel 1" closer to the dash.  Other things might be affected, I just can't think of them right now.

Will keeping your beam where it is right now affect handling?  I doubt it.  At least not that you'll ever notice.  I was pretty OCD when I built my two kits and I'll have to go look at where my front wheels sit in the wheel wells and post a photo.  LOTS of 356s have the front wheels a bit rearward in the wells.  At least you'll fit in with the rest of us. This is not true.  All supers had strut front end. 1971-1972 supers had a flat windshield, same as standard Beetle's.  From 1973 on the windshield changed to a curved windshield.

By gosh, Rick, that’s right and I stated it poorly.
What I should have said is that standard (beam front) beetles and super beetles were both produced from 1971 - 1975 and buyers could choose either, with the trend toward more supers as time passed.  The dealerships were pushing the supers as their sales margin was slightly better.

The standard and super were essentially different models offering different features, but the engines were the same.  The supers offered much more luggage space (and those big “elephant foot” tail lights!) along with some interior upgrades, but the big thing was the strut front end and better handling.  I can’t remember if the Supers had disks or drums up front - I think drums, but Rick?

Good to see you know your Beetles, @LI-Rick !!

I think all US market Supers came with front drums, but in Europe front disc was an option.  All the Beetles I have owned where 1956-69, so not as familiar with the supers.

I built up four dune buggies, 2 with Swing arm

and two with IRS (one of those was Corvair powered) but nothing later than 1970 for the pans.  that was back in the day when you could get a running engine for under $100 and a good transaxle for $25!!!!

Just picked this Berrien tube frame & Nostalgia body at ACME today, something to keep me busy in the colder months ~    Ignore the Titanium Graphite grey speedster I know nothing about that just finished project :~) ^ Retired. The man is retired.

Yeah, and slowly building up his tool chest again

I don't know, I talked to Alan last month and he said he was done building......I've heard that before.

^ Retired. The man is retired.

Sign In To Reply
Post Content
*~*~* Paid Advertisement *~*~*
barncobob replied:
miss the Primo beer, dont know if its still made...it was brewed right there on banks of PH

edsnova replied:
Re emblems: IMHO, a fake Mona Lisa deserves to be faked well and carefully!

IaM-Ray replied:
Yes Michael, nearing down to ( 5 x 2 ....Yes, some cars are not worth saving and the hidden costs of E-Vehicles are unknown to most...

Michael McKelvey replied:
Were the 4 pants sizes in 2" increments? If so, very impressive. I thought I was doing good at 2 sizes.

IaM-Ray replied:
Yeah to your DD category one, I do oil, summer to winter tires, sometimes brakes but not much else. ’ I stopped riding motorcycles when...

Stan Galat replied:
Confessional: I bifurcate cars into two clean categories, which keeps me relatively sane. In Category 1 are the transportation...

jncspyder replied:
@Gordon Nichols and lloyd bridges once said ...'looks like i picked the wrong day to stop drinkin'"

Gordon Nichols replied:
I'm reminded of my old Engineering boss and his wife's car. After our company finally took off and the stock was climbing nicely, he...

South Coast Martin (UK) replied:
Oh, and you’ll also find that EVERY replica you try (should you be fortunate enough to be able to try more than your own) handles...

Lane Anderson replied:
"A lot also has to do with the fact that you know how to drive, @DannyP " Amen. I don't consider myself a highly skilled driver yet, but...