This is a conumdrum wrapped in riddle.

An original 1964 356 Coupe but outlawed so much only outlaws might like it. I love the engine but does it belong in a real 356? Personally, when you outlaw the car, why not? But, I'm trying to get past the (over) use of diamond tufted material, maybe if you re-did the dash, but then came the engine bay ahhhh! and the frunk put me over the edge....like way over AAHHHHH! Didn't make reserve .... 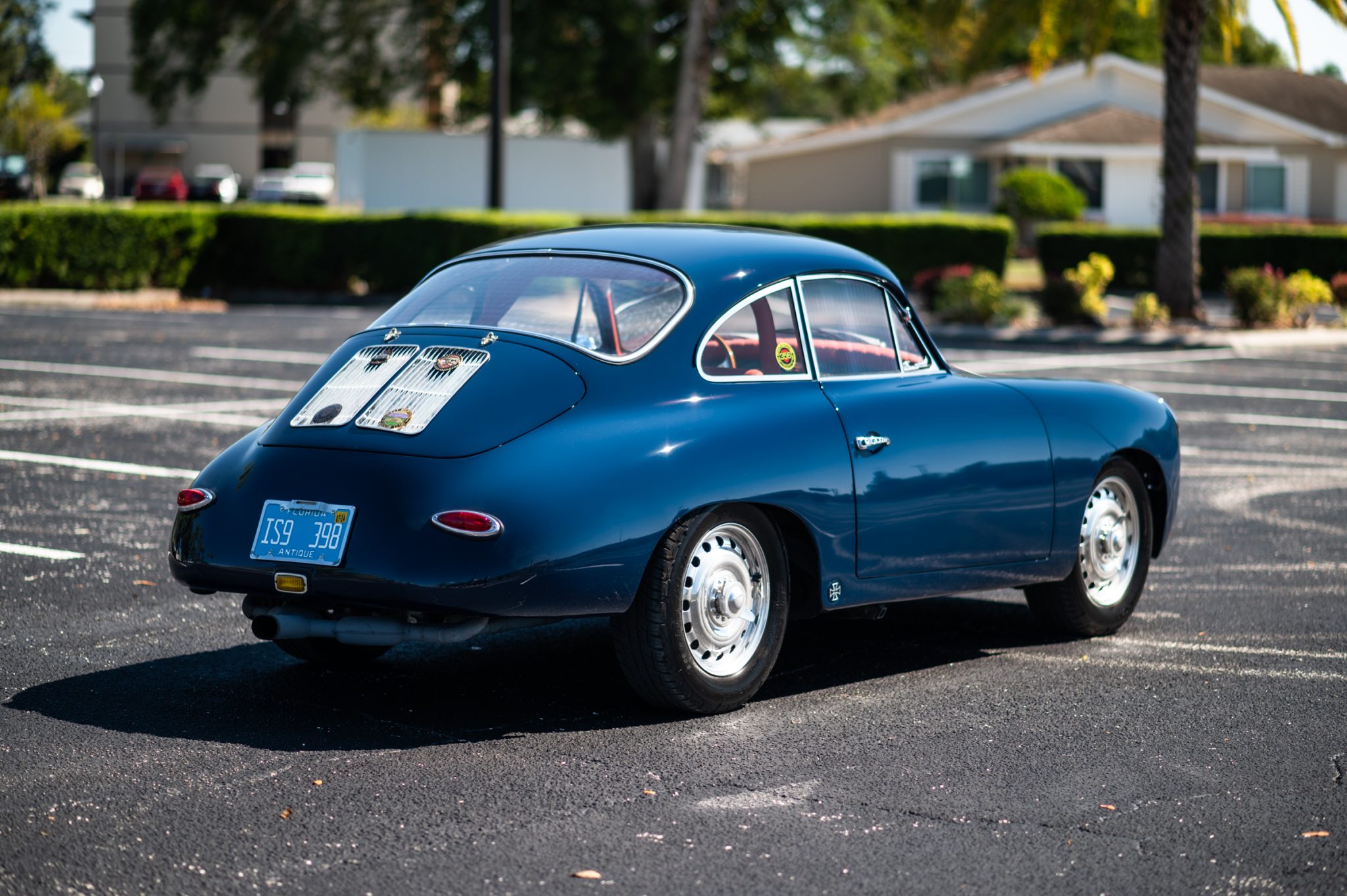 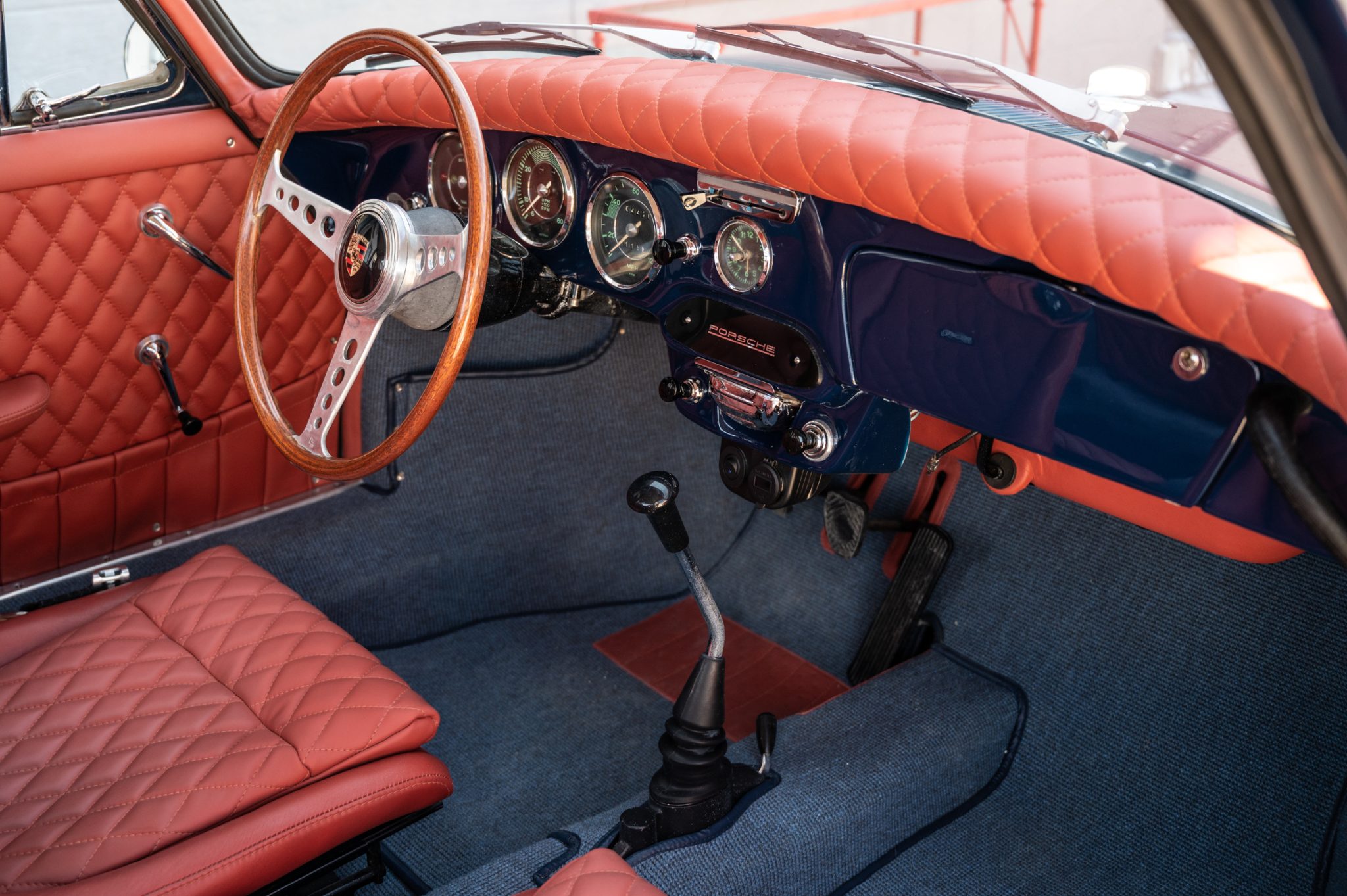 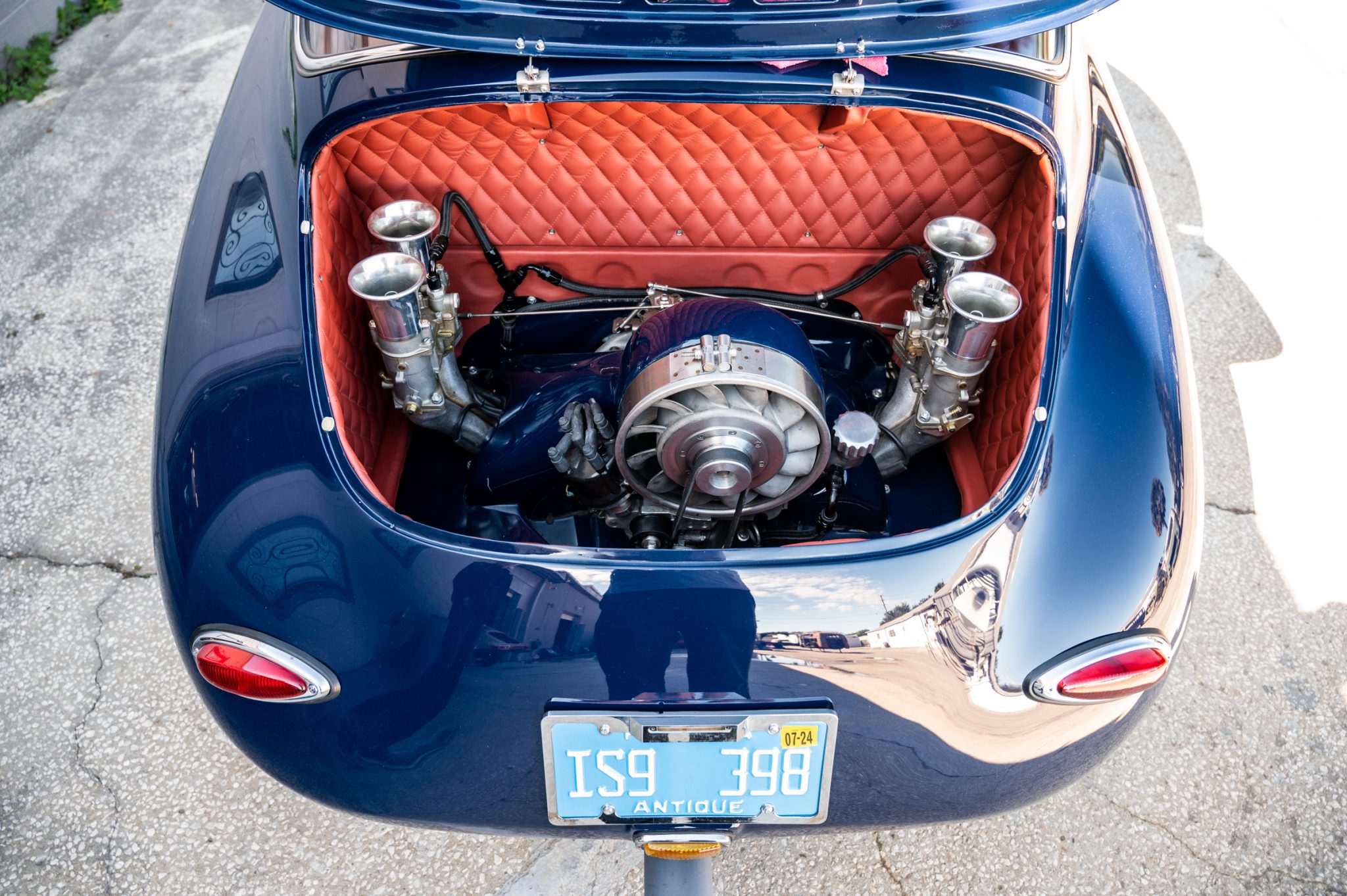 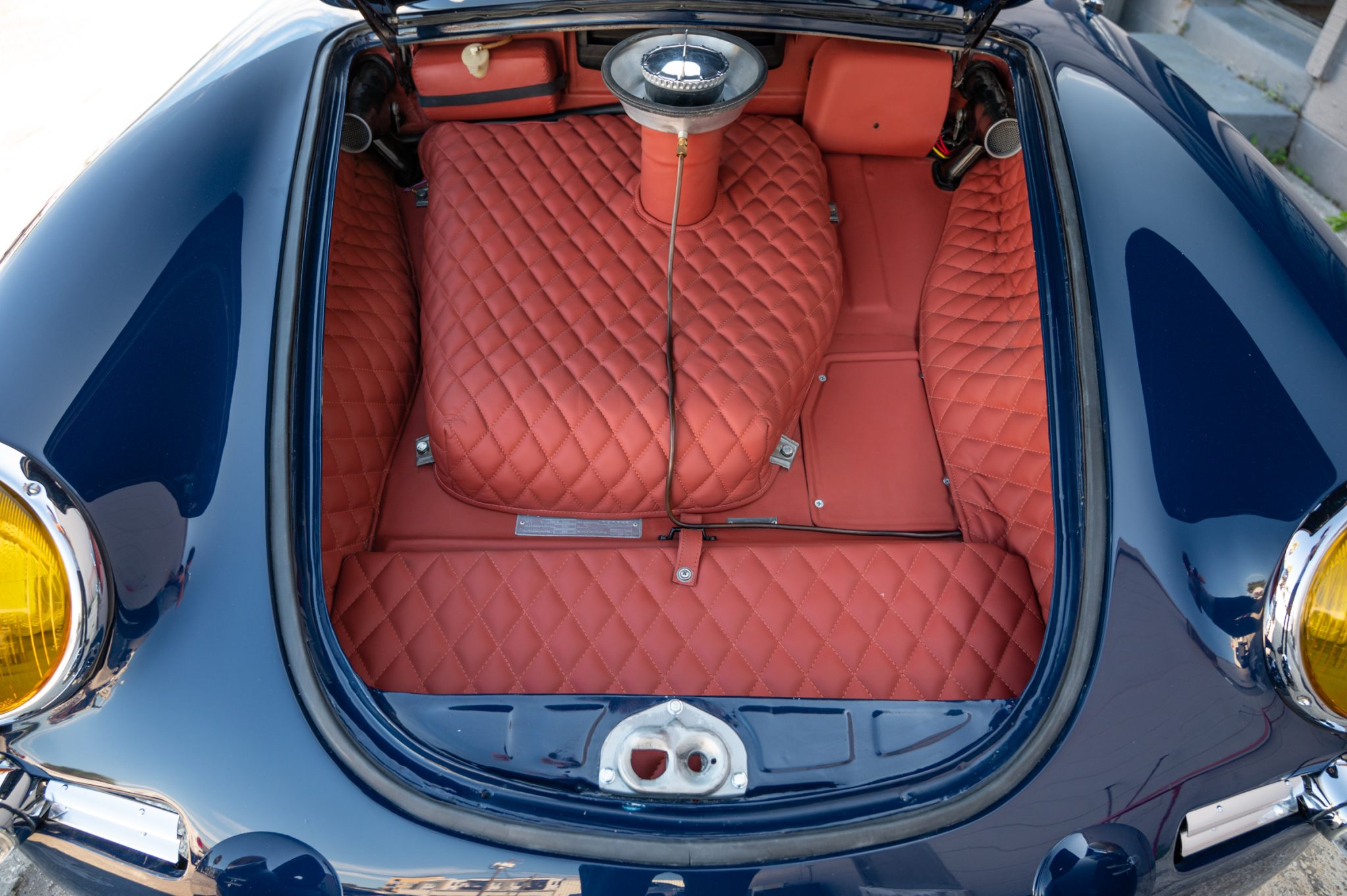 That's for showin' and not for goin'.

Not seeing very much Outlaw !

I would not have done the diamond tuck with that color , black may have worked but then it is being sold in Florida ,

will be interesting where the price ends at , and I am sure there will be a lot more BAT haters  doing what they always do…..

PS:  the roll bar is going to hurt you real bad……

The diamond pleating hurt it more than the Type 1 engine. Mainly because it's more of a hassle & expense to change.

Oh, you say, but a good running 616 engine is so much more spendy than an interior re-do!

Well... Maybe. But once in-hand the engine gets installed in an afternoon. Whereas the upholsterer will have that car in the shop for six weeks.

Yeah, the interior styling does show some regional influence.

In Texas, they probably would have fitted longhorns to the hood — but tastefully, of course.

This has to have been done by someone who was flipping the car for profit and not to own and drive. That often doesn't go well. Whoever did the, um, 'makeover' has probably spent more than a little time at SEMA shows.

They probably started with a car that needed a whole rebuild, inside and out, and maybe with no engine at all. What's the cheapest way to get something like that on the road and also make a splash in an online auction?

A lot of our local 356 folks keep a spare VW engine on the shelf and put it in when the real motor is being rebuilt. After driving a 2332 for a while, I could see someone not bothering with the rebuild. But since no 'numbers matching' engine was also offered with the sale, I'm going with my first hunch that the car was bought with no engine.

I think the diamond stitch accomplished exactly what it was intended to do. It got noticed. Without it, would we be saying much about the car here?

Auction ended at $72,000 not making reserve. The engine (not the bay) looked fantastic.

The car looks great all over except, or course, for the diamond stitching.  I would have expected $90-100k with better upholstery.  I suppose the VW engine might have scared off some snooty folks as well, regardless of its performance.

The trouble with this car (and yes I bid on it) was that with all of the upholstery one could not see the metal underneath all of that for quality. The dash and door cards have got to go seats and engine bay not so bad! Cheers!

I'm not sure what target this guy was aiming for, but I think he missed. The diamond tuck was taken way too far. Diamond tuck leather in the engine compartment, WOW. That's going to look like crap real soon. I liked what it looked like before he touched it.

As far as my car is concerned, I agree diamond tuck doesn't look right in a 50's German race car. The color I chose is understated. If it were another color I wouldn't have done it.

Daniel was all about fluff. There were a few things he did that were good, but many, that were pretty weak. I've been in the process of replacing all the weakness since the day I got it. That's part of the fun.

You all know I abhor the diamond tuck completely. The only reason I like it in Carlos' car is because the seats are the only place it exists. And honestly you can't see it when 2 people are in the car, right?

This auction car is just bad, worse, and awful all-in-one. It needs a tuck-ectomy! All around. Then the car would be mildly interesting.

I agree, it was a C-coupe without a motor. Then it got too much tacky.

You all know I abhor the diamond tuck completely. The only reason I like it in Carlos' car is because it's in Carlos' car, and Carlos is crazy-cool. It also won the "Best in Show" spectator award at Boston's Porschefest a few years back, even with a Suby engine.  "Take THAT, you Purists!"    😉

Sign In To Reply
Post Content
*~*~* Paid Advertisement *~*~*
Remove This Ad
Remove This Ad
barncobob replied:
Vreds are good tires...My 1st speedy came with a 60lb bag of sand in front, no issues

Gordon Nichols replied:
OK - I’ll get it by mid-morning. I’ll try to get both unloaded (wheels off the ground) and loaded measurements for you. I also have a...

IaM-Ray replied:
The issue is simply front brakes can easily lock up and that happens on the front end especially if you get on a washboard or bumpy...

ken whellams replied:
Has anyone else added weight to the front end of their cars to settle the front end at higher speeds?
IaM-Ray replied:
I still would go with a good quality tire as the front of the car is so light you need the best traction you can get.

Alan Merklin replied:
Yes , if you have the axle in you can just measure from the outer lip on the trans flange cup to same on the stub axle. Thanks ~

Gordon Nichols replied:
Epilog: Everything fit as advertised, but the attach point of the cable at the pedal arm is maybe 3/8" forward from the ancient, worn...

Gordon Nichols replied:
@Alan Merklin Do you still need this dimension? Pearl's up on the lift and I can get the measurement for you tomorrow morning if you...

wardog (Warren) replied:
Thanks Carlos & James!
Robert M replied:
If you want the best ride consider using a summer compound tire. You won't be able to drive when it's cold though because the compound...

Carlos G replied:
No washers. You will need 5 studs in that thread size and pitch and 5 nuts that fit them. Or, you can get 5 bolts. Just make sure the...

Cartod replied:
I like big butts and I cannot lie 🎵

Bob: IM S6 replied:
It's as if you have found the girl of your dreams, but she's carrying an extra fifty pounds. You're just not sure what to think. Yes,...